The 48th Fighter Wing at RAF Lakenheath is the Statue of Liberty Wing, the only USAF wing with both a number and a name. Since activation at Chaumont-Semoutiers Air Base, France, on 10 July 1952, Liberty Wing has been one of the premier fighter wings of the United States Air Forces in Europe, spending over 50 years as part of USAFE. The 48 FW has nearly 5,700 active-duty military members, 2,000 British and U.S. civilians, and includes a Geographically Separate Unit (GSU) at nearby RAF Feltwell.

Tactical squadrons of the 48th Operations Group are:

Aircraft of the 48th FW carry the tail code "LN".

RAF Lakenheath and its sister base RAF Mildenhall are the two main U.S. Air Force bases in United Kingdom, and 48th Fighter Wing is the only U.S. Air Force F-15 fighter wing in U.K. and also in Europe.

The first use of Lakenheath Warren as a Royal Flying Corps airfield was in World War I, when the area was made into a bombing and ground-attack range for aircraft flying from elsewhere in the area. It appears to have been little used, and was abandoned when peace came in 1918.

In 1940, the Air Ministry selected Lakenheath as an alternative for RAF Mildenhall and used it as a decoy airfield. False lights, runways and aircraft diverted Luftwaffe attacks from Mildenhall.

Lakenheath Airfield was used by RAF flying units on detachment late in 1941. The station soon functioned as a Mildenhall satellite with Short Stirling bombers of No. 149 Squadron RAF dispersed from the parent airfield as conditions allowed. The squadron exchanged its Vickers Wellingtons for Stirlings late in during November 1941. After becoming fully operational with its new aircraft, the squadron moved into Lakenheath on 6 April 1942 and remained until mid 1944 when the squadron moved to RAF Methwold.

Taking part in more than 350 operations, more than half mine-laying, 149 Squadron had one of the lowest percentage loss rates of all Stirling squadrons.

In early 1943, three T-2 hangars were erected on the north side of the airfield for glider storage, 40 Horsa Gliders being dispersed at Lakenheath during that year.

No. 149 Squadron ended its association with RAF Lakenheath the same month, taking its Stirlings to RAF Methwold. Between them, the two squadrons lost 116 Stirling bombers in combat while flying from Lakenheath.

The reason for the departure of the two bomber squadrons was Lakenheath's selection for upgrading to a Very Heavy Bomber airfield. Lakenheath was one of three RAF airfields being prepared to receive United States Army Air Forces Boeing B-29 Superfortresses, which were tentatively planned to replace some of Eighth Air Force's Third Air Division Consolidated B-24 Liberator groups in the spring of 1945.

The work entailed removal of the existing runways and laying new ones comprising 12 inches of high-grade concrete. The main at 07/25 was 3,000 yards long; the subsidiaries, 01/19 and 14/32, both 2,000 yards; all three being 100 yards wide. Part of the A1065 road between Brandon and Mildenhall was closed, and a new section built further to the east on the Warren. During the peak period of construction, over 1,000 men were working on the site; yet instead of the 12 months planned, it took 18 months for the ground work alone and 2+1⁄2 years before Lakenheath's transformation was complete. The cost was nearly £2 million.

By the time construction ended the war with Germany was over and RAF Lakenheath was put on a care and maintenance status.

Cold War tensions with the Soviet Union in Europe began as early as 1946. In November, President Harry S. Truman ordered Strategic Air Command B-29 bombers to RAF Burtonwood, and from there to various bases in West Germany as a "training deployment". In May 1947, additional B-29s were sent to the UK and Germany to keep up the presence of a training program. These deployments were only a pretense, as the true aim of these B-29s was to have a strategic air force permanently stationed in Europe.

In April 1947, RAF Bomber Command returned to Lakenheath and had the runways repaired, resurfaced, and readied for operations by May 1948. 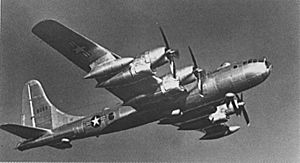 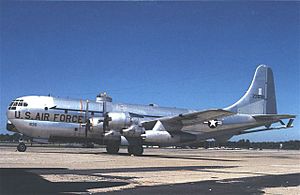 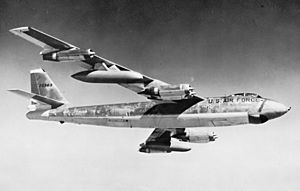 In response to the threat by the Soviet Union, by the 1948 Berlin blockade, President Truman decided to realign USAFE into a permanent combat-capable force. In July, B-29 Superfortresses of the SAC 2nd Bombardment Group were deployed to Lakenheath for a 90-day temporary deployment.

On 27 November 1948, operational control of RAF Lakenheath was transferred from the Royal Air Force to USAFE. The first USAFE host unit at RAF Lakenheath was the 7504th Base Completion Squadron, being activated that date. The squadron was elevated to an Air Base Group (ABG) on 28 January 1950, and to a Wing (ABW) on 26 September 1950.

Control of RAF Lakenheath was allocated to Third Air Force at South Ruislip Air Station, which had command of SAC B-29 operations in England. Third Air Force was subsequently placed directly under USAF orders, with Strategic Air Command establishing the 7th Air Division Headquarters at RAF Mildenhall. The collocation of the two headquarters within the United Kingdom allowed HQ USAFE to discharge its responsibilities in England, while at the same time allowing Strategic Air Command to continue in its deterrent role while retaining operational control over flying activities at Lakenheath.

By 1950, Lakenheath was one of three main operating bases for the U.S. Strategic Air Command in the UK, the others were RAF Marham and RAF Sculthorpe. A succession of bombardment squadrons and wings, 33 in all, rotated through Lakenheath, the B-29s giving way to the improved B-50 Superfortresses and then, in June 1954, B-47 Stratojets.

On 1 May 1951, Lakenheath was transferred from USAFE to SAC, and placed under the 3909th Air Base Group. By 1952, high security perimeter fencing was erected. The 3909th moved to RAF Greenham Common in 1954, and was replaced by the 3910th Air Base Group.

Known SAC units which deployed to RAF Lakenheath were:

The increasing tension of the Cold War lead to a re-evaluation of these deployments, and by 1953 SAC bombers began to move its heavy bomb groups further west, behind RAF fighter forces, to RAF Brize Norton, RAF Greenham Common, RAF Upper Heyford and RAF Fairford, while its shorter-range B-47 were sent to East Anglia.

Many SAC Squadrons had aircraft at RAF Lakenheath on a transitory basis without any recorded deployment to the base. For example, in January 1951, a detachment of Convair RB-36D Peacemaker intercontinental bombers from the 5th Strategic Reconnaissance Wing at Travis AFB, California arrived for a few days, and various tanker and transport aircraft also made periodic appearances at the base. Several of the temporary detachments included in-flight refuelling tanker aircraft.

Meanwhile, on 30 April 1956, two Lockheed U-2s were airlifted to RAF Lakenheath to form CIA Detachment A. The first flight of the U-2 was on 21 May. The Central Intelligence Agency unit did not remain long, moving to Wiesbaden Air Base, West Germany on 15 June.

A near nuclear accident occurred on 27 July 1956 – when a B-47 bomber crashed into a storage igloo at Lakenheath containing three MK-6 nuclear weapons while on a routine training mission. Although the bombs involved in the accident did not have their fissile cores installed, each of them carried about 8,000 pounds of high explosives as part of their trigger mechanism. The crash and ensuing fire did not ignite the high explosives and no detonation occurred. The damaged weapons and components were later returned to the Atomic Energy Commission. The B-47 involved in the accident, which killed four crewmen, was part of the 307th Bombardment Wing.

On 10 October 1956, a United States Navy Douglas R6D-1 Liftmaster transport on a Military Air Transport Service flight carrying 50 members of the 307th Bombardment Wing on their way home to the United States after a temporary duty assignment and a U.S. Navy crew of nine disappeared over the Atlantic Ocean after departure from RAF Lakenheath for a flight to Lajes Field in the Azores with the loss of all 59 people on board.

Following French president Charles de Gaulle's insistence in 1959 that all non-French nuclear-capable forces should be withdrawn from his country, the USAF began a redeployment of its North American F-100-equipped units from France. The 48th TFW left its base at Chaumont AB, France on 15 January 1960, its aircraft arriving at Lakenheath that afternoon. When the first F-100D touched down on RAF Lakenheath's runway, the landing symbolised a return for the Statue of Liberty Wing. Almost 16 years had passed since the World War II Ninth Air Force 48th Fighter Group's arrival at RAF Ibsley, England, for the D-Day invasion. 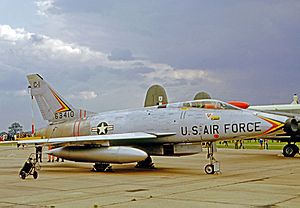 In conjunction with this transfer, control of RAF Lakenheath was transferred from Strategic Air Command back to USAFE. As SAC elements began their departure, the 3910th Air Base Group began its transition of handing RAF Lakenheath's facilities and real estate over to the 48th's Combat Support Group elements.

The tactical components of the 48th TFW upon arrival at Lakenheath were:

The squadron markings consisted of alternating stripes across the tailfin in squadron colours, with a shadowed "V" shaped chevron on the nose. Starting in March 1970, squadron tail codes (shown above) were added when the aircraft went from a natural finish to a Southeast Asian camouflage motif.

The period between 1972 and 1977 can be described as a five-year aircraft conversion. Beginning in late 1971, the 48th TFW started its conversion to the McDonnell Douglas F-4D Phantom II, with the aircraft being transferred from the 81st TFW at RAF Bentwaters. The conversion to the F-4D took several years, with the last F-100 departing in August 1974. With the arrival of the Phantoms, the F-4s adopted a common tail code of "LK". This tail code lasted only a few months as in July and August 1972 the 48th TFW further recoded to "LN". The F-4D carried squadron identifying fin cap colours of blue, yellow and red (492d, 493d, 494th respectively).

A fourth fighter squadron, the 495th Tactical Fighter Squadron was activated with the 48th TFW on 1 April 1977, with a squadron tail color of green. This was 33 years to the day since the squadron's inactivation. The 495th's mission of functioning as a replacement training unit for the other three fighter squadrons. This made the 495th and the 48th TFW unique, as the only WSO (Weapons System Operator) training unit for USAFE.

F-111s from the 48th TFW participated in 1986 United States bombing of Libya in 1986. This bombing of Libya prompted the mock-acronym, Lakenheath Is Bombing Your Ass. During the operation one F-111 from Lakenheath was shot down by Libyan forces and the two crew members were killed. The Libyan government eventually returned one of the bodies, however there is still much controversy over the remains of the other missing pilot.

With the pending closure of Bitburg Air Base, Germany on 25 February 1994, it was decided to reactivate the 493d as an F-15C/D squadron. Aircraft were transferred from the 33d Fighter Wing at Eglin AFB, Florida, and the 493d was reactivated on 1 January. The 493d's arrival meant that the 48th became the largest F-15E/F-15C composite unit in the U.S. Air Force.

On 22 March 2011, F-15E 91-0304 crash-landed and was destroyed in eastern Libya after reportedly suffering from a mechanical failure. Both crewmen ejected and were safely recovered.

On 8 October 2014, F-15D 86-0182 belonging to the 493d Fighter Squadron crashed during a training flight in a field outside Spalding, Lincolnshire. The pilot successfully ejected and was shortly recovered back to Lakenheath on board a Pave Hawk.

All content from Kiddle encyclopedia articles (including the article images and facts) can be freely used under Attribution-ShareAlike license, unless stated otherwise. Cite this article:
RAF Lakenheath Facts for Kids. Kiddle Encyclopedia.