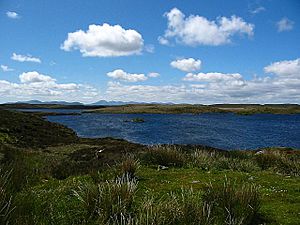 Loch Orasaigh and Rainish Eilean Mòr with the hills of Harris beyond.

The entirety of the loch has been an SSSI since 1983 and the island's perimeter and the neighbouring islet to the south west have woodland cover including the species of Rowan, Aspen, Downy Birch, Grey Willow and Sallow Willow. The underlying geology is Lewisian Gneiss overlain by peaty podzols and gleys.

The Gaelic name of the island, means "large island of Rainish" and is taken from the surrounding area, which itself means "Roe deer headland", from Old Norse.

All content from Kiddle encyclopedia articles (including the article images and facts) can be freely used under Attribution-ShareAlike license, unless stated otherwise. Cite this article:
Rainish Eilean Mòr Facts for Kids. Kiddle Encyclopedia.