Ramsey Lake (French: Lac Ramsey) is a lake in Sudbury, Ontario, located near the city's downtown core. Until 2001, Ramsey Lake was listed by the Guinness Book of World Records as the world's largest lake located entirely within the boundaries of a single city, but when the Regional Municipality of Sudbury was amalgamated into the current city of Greater Sudbury, Ramsey Lake lost this status to the larger Lake Wanapitei, approximately 20 kilometres (12 mi) to the northeast.

"Ramsey" is the correct spelling of the lake's name, although some sources refer to it as "Ramsay"; different sources give the lake's name in both the "Lake Ramsey" and "Ramsey Lake" forms. Prior to the establishment of the modern city of Sudbury, the lake was known to the local Ojibwe population as Bitimagamasing, or "water that lies on the side of the hill".

Science North is located on the southwest corner of the lake, and offers the William Ramsey boat tour, formerly the Cortina, of the lake several times daily during the summer. The city's Bell Park is also located nearby, and the Jim Gordon Boardwalk connects the two sites along the lakeshore. Laurentian University is also located near the lake's southern shore. Residential neighbourhoods immediately south of the lake are among the wealthiest in the city. On the eastern end of the lake, Moonlight Beach is a popular recreational facility, and the Lake Laurentian Conservation Area is a large wilderness park which offers both recreational and environmental education programs. 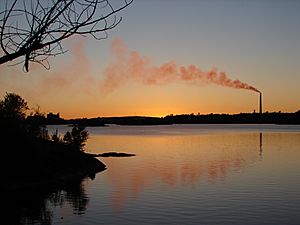 Ramsey Lake sunset with the Inco Superstack dominating the skyline

Ramsey Lake was also the site of one of the city's first major environmental reclamation projects. Due to air pollution problems in the area, the lake — which has few water flow outlets — was considered a dead lake for many years. However, following the 1972 construction of the Inco Superstack, which dispersed smelter emissions from the city's mining industry over a wider area, a major environmental project was launched to clean up the lake's water and reintroduce aquatic life.

The project, which was successful, led to further initiatives to improve the city's environment, including a major tree planting initiative. In 1992, the United Nations presented the city of Sudbury with an award to recognize the city's innovative environmental reclamation strategies.

Blue-green algae blooms that can produce toxins may be present in the lake.

All content from Kiddle encyclopedia articles (including the article images and facts) can be freely used under Attribution-ShareAlike license, unless stated otherwise. Cite this article:
Ramsey Lake Facts for Kids. Kiddle Encyclopedia.