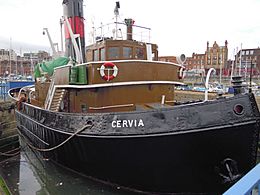 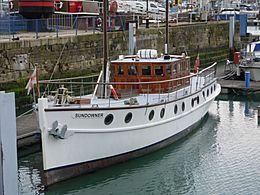 Ramsgate Maritime Museum is a maritime museum in Ramsgate, Kent, England, that describes the maritime history of East Kent. The museum is situated in the Clock House on the quayside of the Royal Harbour at Ramsgate.

Ramsgate Maritime Museum is run by the Steam Museum Trust, a registered charity.

The museum is housed in buildings leased from Thanet District Council.

The Clock House was built in 1817 by Benjamen Wyatt and George Louch. It was later altered by John Rennie and has now been designated as a Grade II* listed building.

There are four permanent galleries covering the development of the harbour, navigation, fishing, lifeboats and shipwrecks. A fifth exhibition space houses a 17th-century 32-pounder demi-cannon raised from the wreck of HMS Stirling Castle. A number of artefacts come from the nearby Goodwin Sands which is responsible for numerous shipwrecks.

The museum reopened on 5 May 2012, having been closed for several years, and plans are afoot to completely revamp the Clock House building and Pier Yard surrounds.

All content from Kiddle encyclopedia articles (including the article images and facts) can be freely used under Attribution-ShareAlike license, unless stated otherwise. Cite this article:
Ramsgate Maritime Museum Facts for Kids. Kiddle Encyclopedia.