Kids Encyclopedia Facts
For the related television program, see Quayside (soap opera). For the infrastructure of a port, see Quay. 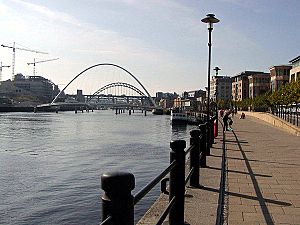 The view westwards along the Tyne Valley

The Quayside is an area along the banks (quay) of the River Tyne in Newcastle upon Tyne (the north bank) and Gateshead (south bank) in the North East of England, United Kingdom.

The area was once an industrial area and busy commercial dockside serving the area, while the Newcastle side also hosted a regular street market. In recent years the docks became run-down, and the area has since been heavily redeveloped to provide a modern environment for the modern arts, music and culture, as well as new housing developments (e.g. at St Peter's Marina). The NewcastleGateshead initiative now lists the Quayside as a top ten attraction.

The Gateshead side of the river is designated and signposted as Gateshead Quays. It is the site of the BALTIC Centre for Contemporary Art and The Sage Gateshead performing arts and conference centre. Also moored on the Gateshead side from 1984 until 2008 was the Tuxedo Princess (replaced for a time by sister ship Tuxedo Royale), a floating nightclub, beneath the Tyne Bridge near The Sage.

One of the Quayside's main features is the pedestrian Gateshead Millennium Bridge, opened in 2001, which spans the river between the BALTIC Centre for Contemporary Art and the Newcastle Law Courts. The other bridge which allows direct road and pedestrian links between the two banks is the low level Swing Bridge, built in 1876, and located nearer the two respective city centres. Using the two bridges, the Quayside is the venue for the junior course of the annual Great North Run.

Go North East's QuayLink Q1, Q2 and Q3 services operate frequently. QuayLink connects most of the main attractions and destinations in NewcastleGateshead, serving those who live, work, study, or those just visiting the area. The buses run frequently, from early until late, 7 days a week.

Q2 operates the same route as the Q1, but in the opposite direction.

All content from Kiddle encyclopedia articles (including the article images and facts) can be freely used under Attribution-ShareAlike license, unless stated otherwise. Cite this article:
Quayside Facts for Kids. Kiddle Encyclopedia.