The Rancho Santa Maria de los Peñasquitos was the first Mexican land grant in present-day San Diego County. Ruiz built an adobe home on the rancho, which was north of the Presidio and Mission San Diego de Alcalá, and nearby the Kumeyaay settlement of Awil Nyawa. Ruiz built the first ranch house on the rancho in 1824, which was later expanded upon. 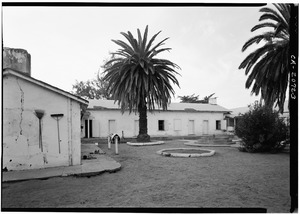 A view of the courtyard at the Johnson-Taylor Ranch House, in about 1933.

The rancho was also a way station on the wagon road to Warner's Ranch from San Diego via San Pasqual and Santa Ysabel Asistencia, from the 1840s. From 1857 to 1860 the rancho was a way station on that road for the coaches of the San Antonio-San Diego Mail Line on the 125 mile route between San Diego and Carrizo Creek Station via the Warner's Ranch road, and the Southern Emigrant Trail. Passengers were given meals here, served by the lady of the house. Rancho Peñasquitos was 20 miles from San Diego and 16 miles from the next station at San Pasqual.

Historic sites of the Rancho

The Los Peñasquitos Canyon Preserve park also preserves habitat on the former rancho lands for more than 500 plant species, with many being rare or endemic native plants in the coastal sage scrub ecosystem. This locale was known to be quite wooded with riparian forests and oak woodlands as late as the 1880s, at which time California state survey recommended preservation of the locale's trees and woodland plant communities to prevent further erosion and subsequent flooding, which had already occurred from areas of prior deforestation. Additional present-day park land acquisition and plant restoration is ongoing. A tree endemic to only this area is the Torrey Pine, the rarest native pine in the United States and an endangered species surviving in a single mainland population within Torrey Pines State Natural Reserve and the adjacent coastal strip.

All content from Kiddle encyclopedia articles (including the article images and facts) can be freely used under Attribution-ShareAlike license, unless stated otherwise. Cite this article:
Rancho Santa Maria de Los Peñasquitos Facts for Kids. Kiddle Encyclopedia.