Rancho Peñasquitos is a suburban community in the northeastern part of the city of San Diego, California. It is named after the first Mexican land grant in the county, Rancho Santa Maria de Los Peñasquitos. Peñasquitos means "little cliffs" in Spanish. It abuts Los Peñasquitos Canyon Preserve, an open space preserve that offers hiking, biking, and equestrian trails. The community is commonly abbreviated "PQ."

The highest point in the community is Black Mountain, which rises to an elevation of 1,500 feet (460 m).

Native American Kumeyaay history within the area dates back as far as 7,000 years ago. Remains of the prehistoric culture can still be found. Rancho de los Peñasquitos was present-day San Diego County's first rancho, the Rancho Santa Maria de Los Peñasquitos. In 1823, one league (4,243 acres; 17 km²) was awarded to Captain Francisco María Ruiz, a Commandant of the Presidio of San Diego. This one league was at the eastern part of the Los Peñasquitos Canyon and extended into Sabre Springs and up to Rancho Bernardo.

It was a way station on the Wagon road to Warner's Ranch from San Diego. From 1857 to 1860 it was a station on that road for the San Antonio-San Diego Mail Line between San Diego and Vallecito via San Pasqual, Santa Ysabel Asistencia, Warner's, and Rancho Valle de San Felipe. It operated as a ranch until 1962, when real estate developer Irvin Kahn acquired the 14,000 acre parcel with the intent of building a 150,000 resident planned community.

The San Diego Metropolitan Transit System operates one bus through the area, #20, with a stop on Carmel Mountain Road. 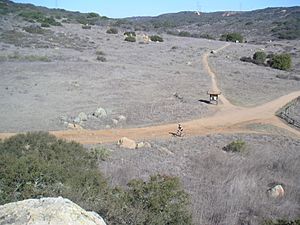 A bicyclist enjoys Los Peñasquitos Canyon Preserve near the waterfall. 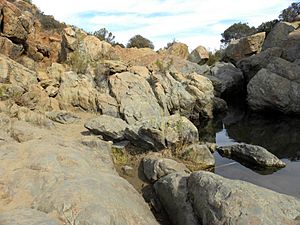 All content from Kiddle encyclopedia articles (including the article images and facts) can be freely used under Attribution-ShareAlike license, unless stated otherwise. Cite this article:
Rancho Peñasquitos, San Diego Facts for Kids. Kiddle Encyclopedia.