Raymond James Donovan (August 31, 1930 – June 2, 2021) was an American business executive and politician. He served as U.S. Secretary of Labor under President Ronald Reagan from 1981 to 1985. He resigned after being the first serving member of the Cabinet of the United States to be indicted, but was ultimately acquitted in 1987.

Donovan was born in Bayonne, New Jersey, on August 31, 1930. He was the seventh of twelve children of David and Eleanor Donovan, who both died by the time he was 18 years old. He attended St. Peter's Preparatory School, before studying at Notre Dame Seminary in New Orleans, Louisiana. Although he contemplated becoming a priest, he returned to Bayonne after graduating in 1952 in order to look after his younger siblings.

Donovan was employed as a laborer responsible for unpacking Ballantine beer trucks, and became part of the electrical workers union. He then worked for the American Insurance Company until 1959, when he joined Schiavone Construction Company as its vice president in charge of labor relations, finance, bonding, and real estate. He was promoted to executive vice president in 1971. 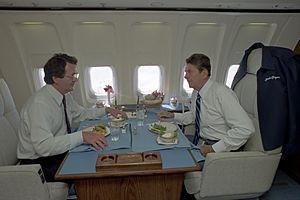 Donovan and President Ronald Reagan aboard Air Force One in 1981

Throughout his tenure, Donovan was noted for his frosty dealings with leaders of organized labor. His implementation of Reagan's conservative business agenda – of free enterprise with limited regulation from the government – was seen by them as reducing protections in the workplace and rolling back the hard-fought improvements they had achieved under the previous Carter administration. He resigned from his position on March 15, 1985, five months after he was indicted. He was the first serving member of the Cabinet of the United States to be indicted.

Donovan held 50% ownership in Schiavone Construction until its late 2007 sale to Spanish conglomerate, Grupo ACS. He also co-founded and was a part-owner of the Fiddler's Elbow Country Club. He was noted for his philanthropy in the field of education and to the Catholic Church. He also participated in a local program that assisted in exonerating individuals who had been wrongfully convicted.

Donovan married Catherine Sblendorio in 1957. They remained married until his death. Together, they had three children: Kenneth, Mary Ellen, and Keith.

Donovan died on June 2, 2021, at his home in New Vernon, New Jersey. He was 90, and suffered from congestive heart failure prior to his death.

All content from Kiddle encyclopedia articles (including the article images and facts) can be freely used under Attribution-ShareAlike license, unless stated otherwise. Cite this article:
Raymond J. Donovan Facts for Kids. Kiddle Encyclopedia.