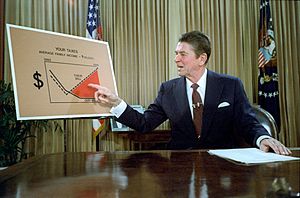 Reagan gives a televised address from the Oval Office, outlining his plan for tax reductions in July 1981

Reaganomics is a portmanteau word of Reagan and economics created by Paul Harvey. It refers to the economic policies created by U.S. President Ronald Reagan during the 1980s and still widely practiced.

The four main ideas of Reaganomics were to reduce the growth of government spending, reduce the federal income tax and capital gains tax, reduce government regulation, and tighten the money supply in order to reduce inflation.

All content from Kiddle encyclopedia articles (including the article images and facts) can be freely used under Attribution-ShareAlike license, unless stated otherwise. Cite this article:
Reaganomics Facts for Kids. Kiddle Encyclopedia.