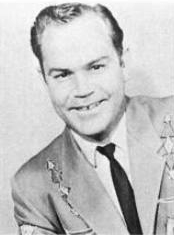 Red Simpson (March 6, 1934 – January 8, 2016) was an American country singer-songwriter. He was best known for his trucker-themed songs such as the 1971 single "I'm a Truck". The song reached fourth on the U.S. and Canadian country charts. He began his career in 1966.

Simpson was born in Higley, Arizona. He grew up in Bakersfield, California.

In December 2015, Simpson had a heart attack and was taken to hospital. He died from problems caused by the heart attack on January 8, 2016 in Bakersfield. He was 81.

All content from Kiddle encyclopedia articles (including the article images and facts) can be freely used under Attribution-ShareAlike license, unless stated otherwise. Cite this article:
Red Simpson Facts for Kids. Kiddle Encyclopedia.