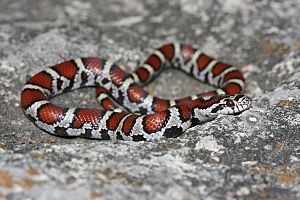 The red milk snake is found from southern Indiana through northwestern Mississippi, western Kentucky, southeastern South Dakota through eastern Oklahoma and Kansas. An isolated population can be found in Bankhead National Forest in northwestern Alabama.

Red milk snakes average 60 to 91 centimetres (24 to 36 in) in length, although specimens as long as 132 centimetres (52 in) have been measured. They have smooth and shiny scales. Their dorsal color pattern is narrow bands of white, pale gray, cream, or tan bordered by black, alternated with red dorsal saddles. Some individuals display even greater dorsal saddle color diversity, ranging from reddish brown to grayish brown. The ventrum is usually white with a black checkered pattern. The head usually has a large red blotch edged in black.

Red milk snakes are constrictors. They consume a wide variety of small animals, such as rodents, other reptiles, amphibians, and birds.

All content from Kiddle encyclopedia articles (including the article images and facts) can be freely used under Attribution-ShareAlike license, unless stated otherwise. Cite this article:
Red milk snake Facts for Kids. Kiddle Encyclopedia.