Reinhard Kollak was the highest scoring non commissioned Nachtjagd pilot who, together with his Bordfunker Hans Herman, was credited with 49 victories in over 250 missions, all at night. 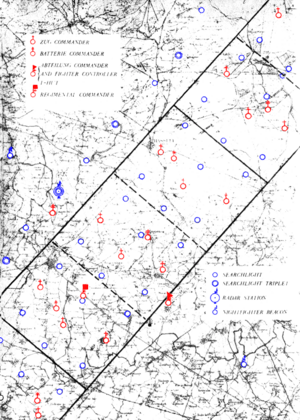 A map of part of the Kammhuber Line. The 'belt' and night fighter 'boxes' are shown.

Following the 1939 aerial Battle of the Heligoland Bight, the majority of RAF attacks shifted to the cover of darkness, initiating the Defence of the Reich campaign. By mid-1940, Generalmajor (Brigadier General) Josef Kammhuber had established a night air defense ground-controlled interception system (the Kammhuber Line). It consisted of a series of control sectors equipped with radars and searchlights and an associated night fighter. Each sector, named a Himmelbett ("canopy bed"), would direct the night fighter into visual range of target bombers. In 1941, the Luftwaffe started equipping night fighters with airborne radar such as the Lichtenstein radar. This airborne radar did not come into general use until early 1942.

Kollak claimed his first-night victory while flying as a Feldwebel with I. Gruppe of Nachtjagdgeschwader 1 (NJG 1—1st Night Fighter Wing), when he shot down an Armstrong Whitworth Whitley medium bomber in the early hours of 17 June 1941 in the vicinity of Hasselt. He remained with I./NJG 1 when it was redesignated 7./NJG 4 in May 1942 and on the night of 24/25 August 1942, shot down a Short Stirling heavy bomber as his tenth victory. He was awarded the German Cross in Gold (Deutsches Kreuz in Gold) on 12 April 1943. He received the Knight's Cross of the Iron Cross (Ritterkreuz des Eisernen Kreuzes) following his 29th aerial victory. The presentation was made by General Kammhuber on 29 August 1943 at the St. Trond airfield to both Kollak and Major Walter Ehle, the Gruppenkommandeur of II./NJG 1.

Kollak was the most successful pilot of III./NJG 4. Hans Herman joined the Luftwaffe in 1938 and served as Kollak's Bordfunker until the war's end.

After the war, Reinhard found it difficult to adjust to civilian life before he rejoined the newly founded Bundeswehr in 1956, and retired in 1967 as a Hauptfeldwebel. On 6 February 1980, he died at the age of 64.

All content from Kiddle encyclopedia articles (including the article images and facts) can be freely used under Attribution-ShareAlike license, unless stated otherwise. Cite this article:
Reinhard Kollak Facts for Kids. Kiddle Encyclopedia.