Remembering You (song) facts for kids

"Remembering You" received positive reviews from music critics, who praised the sound and considered it a highlight of the album. It was released to Christian radio stations on August 5, 2005, and ranked as one of the most-played songs of 2006 on Christian radio. It peaked at number nine on the Billboard Christian Songs and number 22 on the Billboard Adult Contemporary charts respectively. 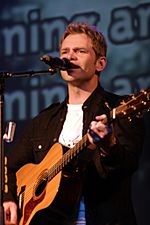 Chapman was one of many Christian artists featured on the soundtrack, the "centerpiece" of Disney's outreach to Christian audiences.

Chapman had learned of the production behind a Narnia film from a friend who worked at Disney. Chapman was not shown the completed film, but was given access to part of the script and was advised to read the novel. Though Chapman had already read most of Lewis's Christian theological works, he had never read any of the Narnia books before. After reading the Narnia books, Chapman was impressed and felt that Lewis was able to relate the story of Jesus in a way that people of any age could understand. Chapman had several ideas for songs, ultimately settling on "Remembering You", as he felt it best represented the "essence" of the novel.

"Remembering You" has a length of three minutes and 52 seconds. The song is set in 3
4 time in the key of A major and has a tempo of 151 beats per minute; Chapman's vocal range in the song spans from C2 to E5. Music critics described it as a pop song, with some noting Celtic and folk influences, as well as its prominent usage of strings throughout. Russ Breimeier of Christianity Today described the song as being similar in style to many of Chapman's previous singles. Several critics noted that the song could be seen as representing the story in The Lion, the Witch, and the Wardrobe or having a Christian message. During the song, Chapman references Aslan's meetings with the Pevensies, singing "I found you in the most unlikely way/But really it was you who found me, and I found myself in the gifts that you gave".

According to Chapman, "Remembering You" is set at the end of The Lion, the Witch, and the Wardrobe from the perspective of the main characters, with them saying that whenever they see the beginning of spring, the characters would remember what Aslan had done and what would be coming in the future; he felt that this was where the story had left him at and wanted to "capture" it in the song. Chapman said that he loved the ending of the story because "it is really just a beginning, and you know there’s so much more to come. That’s the story of God’s grace, too".

"Remembering You" was released as the first single from Music Inspired by The Chronicles of Narnia: The Lion, the Witch and the Wardrobe. The song was serviced to US Christian radio stations on August 3, 2005 and was released for digital download on August 23, 2005. Although the songs on the album were written by Christian artists, EMI aimed to market it to both Christian and secular radio stations as part of a two-tiered promotion for the upcoming film release in December, with Disney "aggressively courting" Christian audiences while trying to avoid alienating secular audiences. Plans for an additional soundtrack featuring secular musicians were scrapped, leaving the Christian Inspired By album as the only soundtrack album released in promotion of the film.

The accompanying music video for "Remembering You" was released online via the Yahoo! News homepage on December 6, 2005. The video features scenes from the film cut with scenes of Chapman performing. It was shot in southern California and used several of the sets that were included in the film, including the lamppost. The visual used potato flakes to simulate the appearance of snow, which represent evil in the book and film.

All content from Kiddle encyclopedia articles (including the article images and facts) can be freely used under Attribution-ShareAlike license, unless stated otherwise. Cite this article:
Remembering You (song) Facts for Kids. Kiddle Encyclopedia.