RCHS was incorporated to: 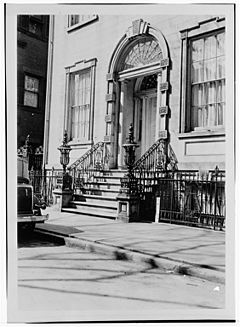 In 1952, the Hart-Cluett Mansion (1827) was turned over to the Society by Mrs. Cluett to serve as a historic house museum and repository for the county's historical artifacts and archival materials.

In the mid-1950s, the Trustees recruited professional help to create a museum. In 1957, H. Maxson Holloway, formerly a Curator at the New-York Historical Society, was hired as the Society's first director. Holloway's immediate plans included the careful acquisition of fine and decorative arts as well as period furnishings to fill the fourteen rooms of the Hart-Cluett Mansion.

Over the next decade raising money and acquiring objects continued with the highlights of this effort were objects and furnishings from the Hart and Cluett families and their descendants.

By the mid-1970s, the Rensselaer County Historical Society had outgrown the Hart-Cluett Mansion and the associated Carriage House. Growth of the collections and demands for programs had outpaced the building's space.

In 1976, the RCHS acquired the Carr House (1838), the building to the north of the Museum. RCHS undertook a capital campaign to begin making it into an educational and administrative center. The first phase of the 57 Second Street project was finished in 1982, providing a meeting room, gift shop and temporary exhibition gallery on the first floor of the building.

RCHS is the primary collecting institution in Rensselaer County and contains in its museum collections approximately 60,000 objects ranging from the fine to the domestic arts. Items represent the history of Troy, the largest urban center in the county, and Rensselaer County at large, and include information about the city's families and buildings.

Troy and Rensselaer County were major contributors to the growth of the United States in the 19th century and one of the primary sites of the American Industrial Revolution. The prominence of the area was due to the influence that the iron, steel and textile industries created. Foundries produced vital products for growth and expansion of the United States westward.

In the 19th and 20th centuries, Troy's garment industries produced over 90% of America's detachable collars and many of its finest shirts.

The museum collections are also closely connected to RCHS's research library collections which include, in part, personal, organizational and business records, photographs, maps, ephemera, etc., as well as the largest collection of secondary resource material on the county's history.

The RCHS has over 60,000 artifacts, documents, and photographs in its collection. RCHS also houses archives and records for a number of community organizations such as local YMCA, and Troy Chromatics. These collections are used in programs such as the "Historians in Training Programs" conducted with schools in Rensselaer County. The collection has been used in by Charles Osgood for his program CBS Sunday Morning and have been used by Ken Burns, The History Channel, and other media and publishing outlets.

Highlights of the collection

The collection has been extensively used for education, by artists, and as primary source materials in numerous productions.

Among the uses have been:

RCHS uses its humanities collections in a number of ways to promote broad public participation and interest in the history of Rensselaer County. Collections-based exhibitions are focus of the RCHS exhibits, and public programs. RCHS uses artifacts from its collection to demonstrate how they are made, how they are used, how they express human needs and values, and how they influence society and the lives of individuals.

All content from Kiddle encyclopedia articles (including the article images and facts) can be freely used under Attribution-ShareAlike license, unless stated otherwise. Cite this article:
Rensselaer County Historical Society Facts for Kids. Kiddle Encyclopedia.