The QLVNCH was formally established on December 30, 1955 by the Strongman and republican first President of the Republic of Vietnam (known simply as ‘South Vietnam’) Ngo Dinh Diem, which he declared on October 26 that year after winning a rigged referendum for either making South Vietnam a constitutional monarchy, or a presidential republic. Created out from ex-French Union Army colonial Indochinese auxiliary units (French: Supplétifs), gathered earlier on July 1951 into the French-led Vietnamese National Army – VNA (Vietnamese: Quân Đội Quốc Gia Việt Nam – QĐQGVN), Armée Nationale Vietnamiènne (ANV) in French, the armed forces of the new state consisted in the mid-1950s of ground, air, and naval branches of service, respectively:

Their roles were defined as follows: to protect the sovereignty of the free Vietnamese nation and that of the Republic; to maintain the political and social order and the rule of law by providing internal security; to defend the newly independent Republic of Vietnam from external (and internal) threats; and ultimately, to help reunify Vietnam – divided since the Geneva Accords in July 1955 into two transitional states, one at the north ruled by Ho Chi Minh’s Marxist Lao Dong Party regime and the other in the south under Diem’s anti-communist regime. 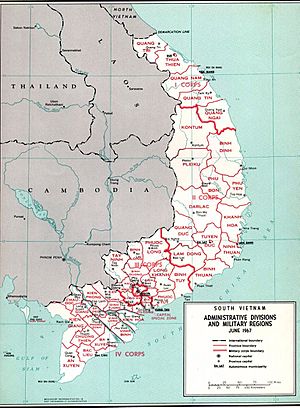 All content from Kiddle encyclopedia articles (including the article images and facts) can be freely used under Attribution-ShareAlike license, unless stated otherwise. Cite this article:
Republic of Vietnam Military Forces Facts for Kids. Kiddle Encyclopedia.