Rhubodach is a small settlement on the north-eastern shore of the Isle of Bute, Scotland. 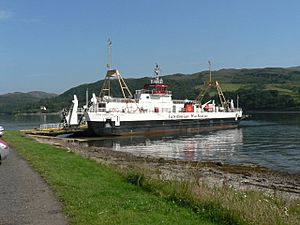 Ferry in the harbour of Rhubodach

The name Rhubodach may come from the Gaelic Rubha a' Bhodaich which translates as old man's point or promontory or alternatively may be from An Rubha Bhódaich meaning the Bute headland.

Rhubodach lies at the north of Bute on the A886 road. From here a small ro-ro ferry sails the short distance over the Kyles of Bute to Colintraive on the Cowal peninsula in Argyll, where the A886 road continues to Strachur. The route, operated by Caledonian MacBrayne, is reputed to be one of the shortest in Scotland still in operation. The issue of whether the ferry should be replaced by a bridge is one which reappears in various discussions about Bute's economy, however opposition stems from the resulting loss of Bute's "island status".

Film actor and director Richard Attenborough owned Rhubodach estate for a number of years. In August 2009, he placed the 2,000-acre (800-hectare) estate up for sale. A referendum carried out on 12 February 2010 showed 93% of islanders supported a plan to buy the land for the community. In January 2011, he sold the estate, which included a forest, for the reduced fee of £1.48 million.

All content from Kiddle encyclopedia articles (including the article images and facts) can be freely used under Attribution-ShareAlike license, unless stated otherwise. Cite this article:
Rhubodach Facts for Kids. Kiddle Encyclopedia.