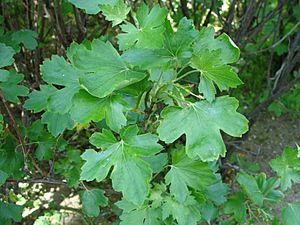 Ribes aureum, known by the common names golden currant, clove currant, pruterberry and buffalo currant, is a species of flowering plant in the genus Ribes. It is native to Canada, most of the United States (except the southeast) and northern Mexico. The variety Ribes aureum var. villosum is sometimes considered a full species, Ribes odoratum.

It belongs to the subgenus Ribes, which contains other currants, such as the blackcurrant and redcurrant (Ribes nigrum and rubrum), and is the sole member of the section Symphocalyx.

The plant blooms in spring with racemes of conspicuous golden yellow flowers, often with a pronounced, spicy fragrance similar to that of cloves or vanilla. Flowers may also be shades of cream to reddish, and are borne in clusters of up to 15. The shrub produces berries about 1 centimeter (0.4 inch) in diameter from an early age. Ripe fruits, amber yellow to black, are edible raw, but very tart, and are usually cooked with sugar. The flowers are also edible.

Ribes aureum is widely cultivated as an ornamental plant, in traditional, native plant, drought tolerant, and wildlife gardens, and natural landscaping projects. Unlike some other species of currants, Ribes aureum is in the remarkably drought-tolerant group of Ribes. Named cultivars have been introduced also.

Although the flowers are hermaphroditic, the yield is greatly benefited by cross-pollination.

The berries are edible but bitter.

The berries were used for food, and other plant parts for medicine, by various Native American groups across its range in North America.

This currant species is susceptible to white pine blister rust (Cronartium ribicola), a fungus which attacks and kills pines, so it is sometimes eradicated from forested areas where the fungus is active to prevent its spread.

All content from Kiddle encyclopedia articles (including the article images and facts) can be freely used under Attribution-ShareAlike license, unless stated otherwise. Cite this article:
Ribes aureum Facts for Kids. Kiddle Encyclopedia.