Ribes divaricatum is a species in the genus Ribes found in the forests, woodlands, and coastal scrub of western North America from British Columbia to California. The three accepted varieties have various common names which include the word "gooseberry". 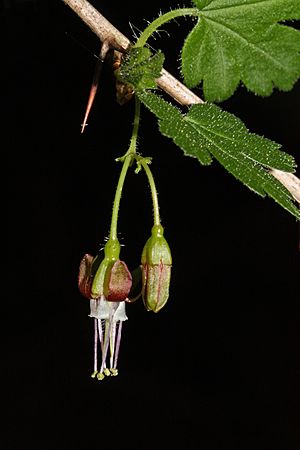 Flower distinguishing features include a red to reddish-green calyx with recurved lobes, white to red petals and stamens that are longer than the calyx lobes.

Ribes divaricatum is a shrub sometimes reaching 3 meters in height with woody branches with one to three thick brown spines at leaf nodes. The leaves are generally palmate in shape and edged with teeth. The blades are up to 6 centimeters long and borne on petioles.

The inflorescence is a small cluster of hanging flowers, each with reflexed purple-tinted green sepals and smaller, lighter petals encircling long, protruding stamens. The fruit is a sweet-tasting berry up to a centimeter wide which is black when ripe. It is similar to Ribes lacustre and Ribes lobbii, but the former has smaller, reddish to maroon flowers and the latter has reddish flowers that resemble those of fuchsias and sticky leaves.

The berries are edible, and are ripe when black.

The fruit was food for a number of Native American groups of the Pacific Northwest, and other parts of the plant, especially the bark, was used for medicinal purposes.

All content from Kiddle encyclopedia articles (including the article images and facts) can be freely used under Attribution-ShareAlike license, unless stated otherwise. Cite this article:
Ribes divaricatum Facts for Kids. Kiddle Encyclopedia.