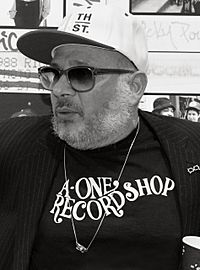 Ricky Powell (November 20, 1961 – February 1, 2021) was an American photographer. He was known for his works with the Beastie Boys. His pictures were seen in The New York Times, the New York Post, the Daily News, The Village Voice, TIME, Newsweek, VIBE, The Source and Rolling Stone. He was born in New York City.

All content from Kiddle encyclopedia articles (including the article images and facts) can be freely used under Attribution-ShareAlike license, unless stated otherwise. Cite this article:
Ricky Powell Facts for Kids. Kiddle Encyclopedia.