Rimouski is a Canadian city located in the Bas-Saint-Laurent region of Quebec at the mouth of the Rimouski River. It has a population of 46,860 (as of 2011) and many tourist, cultural and industrial attractions.

Rimouski is the site of Université du Québec à Rimouski (UQAR), the Cégep de Rimouski (which includes the Institut maritime du Québec) and the Music Conservatory. It is also the home of some ocean sciences research centres (see below).

The city was founded by Sir René Lepage de Ste-Claire in 1696. Originally from Ouanne in the Burgundy region, he exchanged property he owned on the Île d'Orléans with Augustin Rouer de la Cardonnière for the Seigneurie of Rimouski, which extended along the St. Lawrence River from the Hâtée River at Le Bic to the Métis River. De la Cardonnière had been the owner of Rimouski since 1688, but had never lived there. René Lepage moved his family to Rimouski, where it held the seigneurie until 1790, when it was sold to the Quebec City businessman Joseph Drapeau. 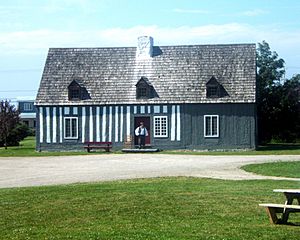 The "Maison Lamontagne" was built in 1750 per Marie-Agnès Lepage, granddaughter of René Lepage de Ste-Claire. It carries now the surname of the family that resided at it in 1844. It is one of the oldest half-timbered houses in Quebec and is within what is now called the District of Rimouski-Est.

Today, a boulevard, park and monument at the western entrance of Rimouski bear the name of René Lepage.

On May 6, 1950 Rimouski suffered a severe fire, in which 319 houses burned to the ground. This event is known as La nuit rouge (French for Red Night). The fire originated in the Price Brothers Company yard on the left shore of the Rimouski River and quickly crossed the river and spread throughout the city pushed by strong winds, destroying half of the city. No one died in the blaze. Legend has it that a priest sprinkled holy water around the city's cathedral and that the fire would not cross the line.

The city is divided into 11 districts. Six of those districts (Pointe-au-Père, Sainte-Blandine, Rimouski-Est, Sainte-Odile-sur-Rimouski and Le Bic) were small communities but were merged within Rimouski in 2002, except for Le Bic, which was merged in 2009. The municipal council is composed of the mayor and eleven councillors, each one representing a district. The municipality is not twinned with any other.

All content from Kiddle encyclopedia articles (including the article images and facts) can be freely used under Attribution-ShareAlike license, unless stated otherwise. Cite this article:
Rimouski Facts for Kids. Kiddle Encyclopedia.