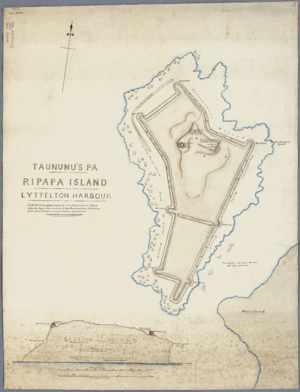 Ripapa Island (also known archaically as Ripa Island) is located just off the shore of Lyttelton Harbour (Whakaraupo) has played many roles in the history of New Zealand. The island initially played a key role in an internal struggle for the South Island Ngāi Tahu tribe in the early 19th Century. Between 1873 and 1885 the island was used as a quarantine station for ships arriving from Britain to the nearby port in Lyttelton, though 1880 saw the use of the quarantine buildings as a prison, notably for members of the Parihaka Māori settlement in Taranaki during its passive resistance campaign against the surveying and selling of its land by the government. The quarantine buildings were dismantled when the Island was incorporated into the coastal defence scheme.

The site of Ripapa Island was perfect for building a pā (a fortification built by the Māori) and in the early 19th century, chief Taununu of the Ngāi Tahu tribe built such a pā on the island. In the 1820s, chief Taununu faced a fierce fight with another Ngāi Tahu group, in what was to be known as the Kai huanga feud. Kai huanga, meaning "eat relatives", refers to the cannibalistic nature of the feud and that those they fought and ate were close relatives, even getting to a point where cousin would eat cousin. The Ngāi Tahu tribe continued to occupy the island until around 1832. Prior to this, Chief Te Whakarukeruke, who had been occupying Ripapa Island, left to help defend Kaiapoi from Te Rauparaha. After Kaiapoi fell, Te Rauparaha overran a number of pā on and around Banks Peninsula, including the pā on Ripapa Island. The island was never again occupied by Māori. 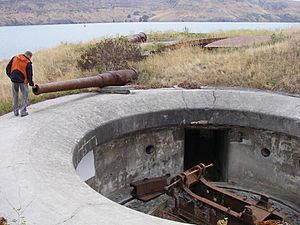 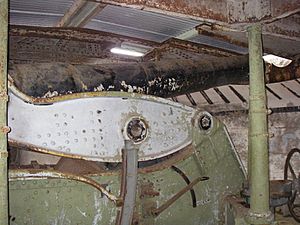 The fort is currently the home of two extremely rare guns. One is a BL 8-inch gun (one of only 12 left in the world), which is still in working order, though there are no shells left for such a weapon. It also holds a smaller BL 6-inch gun. However, at the first test shot the recoil system failed, with the result that the barrel cracked and most of the rest of the gun was damaged and was returned to England for repairs. A test fire in 1939 cracked the mounting. Though these are the only two guns currently in place at Fort Jervois, there are emplacements for another two guns. These two guns are on the island but have been partially destroyed.

The island has been under the control of the Department of Conservation since 1990. Fort Jervois is classed as a Category I historic place by Heritage New Zealand, and has been considered "actively managed" by Canterbury Conservancy. Future plans have been made to return the island to how it was during the Second World War.

The June 2011 Christchurch earthquake damaged Fort Jervois and it was closed for some time. Remedial repairs have now been carried out, and the island was reopened in November 2019. Currently, it is only possible to visit the island by private boat; public ferry services from Lyttelton wharf resumed in 2020.

All content from Kiddle encyclopedia articles (including the article images and facts) can be freely used under Attribution-ShareAlike license, unless stated otherwise. Cite this article:
Ripapa Island Facts for Kids. Kiddle Encyclopedia.