Kids Encyclopedia Facts
Not to be confused with other River Fromes.

The River Frome is a river in Somerset, England. It rises near Bungalow Farm on Cannwood Lane, south-west of Witham Friary, flows north through Blatchbridge to the town of Frome, and continues in a generally northerly direction passing between the eastern edge of the Mendip Hills and Trowbridge before joining the Bristol Avon at Freshford, below Bradford on Avon.

The name Frome comes from the Old British word ffraw meaning fair, fine or brisk and describing the flow of the river. The name was first recorded in 701 when Pope Sergius gave permission to Bishop Aldhelm to found a monastery "close to the river which is called From" (Latin: "juxta fluvium qui vocatur From").

There are many weirs on the river. Several stretches, particularly below Farleigh Hungerford, are used for coarse fishing and some trout fishing.

There are many bridges on the river. In the centre of Frome, the first bridge perhaps appeared in the 14th century. A later 16th-century bridge was widened in the 18th century and buildings were built across it. It remains one of only three bridges in England that have buildings across them; the others are the Pulteney Bridge in Bath and the High Bridge in Lincoln. Other significant bridges include that at Wallbridge in Frome, dated 1634, upstream of the Frome bridge. Downstream are Rode bridge, a turnpike bridge from around 1777; Tellisford bridge, a packhorse bridge probably from the 17th century; Iford bridge, circa 1400; and Freshford bridge, 16th century. 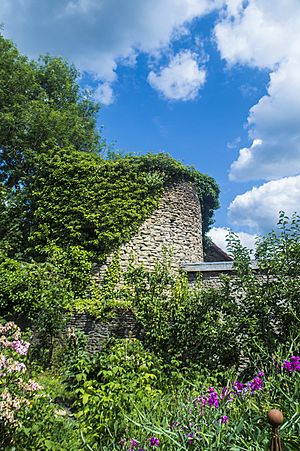 Over the centuries, the river provided power to mills, at first for the grinding of flour. Later, as local industries developed, there were mills for fulling, dyewood grinding (with associated dyehouses) and grist for animal feed or brewing. In the 18th and early 19th century, there were more than 30 mills along the Frome and its tributaries, the Mells and Rodden Brook, from Freshford to four miles south of Frome. Some of the structures can still be seen today: Tellisford, Rode, the upstream mill at Wallbridge, Frome and Blatchbridge. Others have vanished. In Frome a large complex of factory buildings for the woollen industry, with associated workers' cottages in Innox Hill, was established at Spring Gardens by the Sheppard family; these have now disappeared. The Town Mill stood just upstream of Frome bridge; all that is left are linked buildings: a semi-ruinous drying house and buildings for warehousing, dyehouses and storage, most converted to residences. The last textile mill, Tuckers, further downstream at Wallbridge, closed in 1956.

All content from Kiddle encyclopedia articles (including the article images and facts) can be freely used under Attribution-ShareAlike license, unless stated otherwise. Cite this article:
River Frome, Somerset Facts for Kids. Kiddle Encyclopedia.