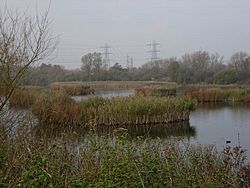 The River Lee Country Park is located in the Lee Valley Park and is managed by the Lee Valley Regional Park Authority. Covering 1,000 acres (400 ha) on either side of the River Lee Navigation between Waltham Abbey and Broxbourne, it is an area of lakes, watercourses, open spaces and three Sites of Special Scientific Interest (SSSI) linked by footpaths and cycle tracks.

The site straddles the Hertfordshire/Essex boundary.

Since the 1930s the area which was originally part of the River Lea flood plain has been the centre of the sand and gravel industry, as a result there are many mature gravel pits. Some of the lakes were used for land fill purposes. In a joint effort by the St Albans Sand and Gravel Co Ltd and the Lee Valley Regional Park Authority the area has been transformed, with much of the park a Site of Special Scientific Interest (SSSI)

The park at the Showground site, Highbridge Street A121, Waltham Cross was the chosen venue for the 2012 Olympics canoeing events. The site is now known as the Lee Valley White Water Centre. 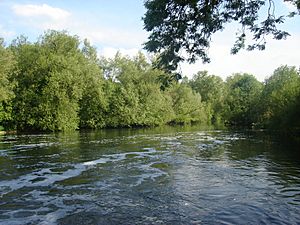 The River Lea at Kings Weir 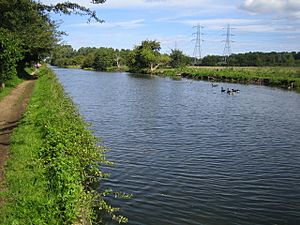 The following are some of the larger waters that can be visited in the park. Some of them form the Turnford and Cheshunt Pits SSSI. 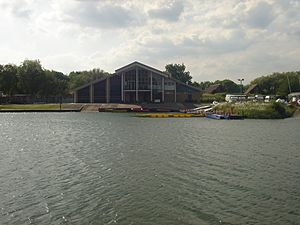 All content from Kiddle encyclopedia articles (including the article images and facts) can be freely used under Attribution-ShareAlike license, unless stated otherwise. Cite this article:
River Lee Country Park Facts for Kids. Kiddle Encyclopedia.