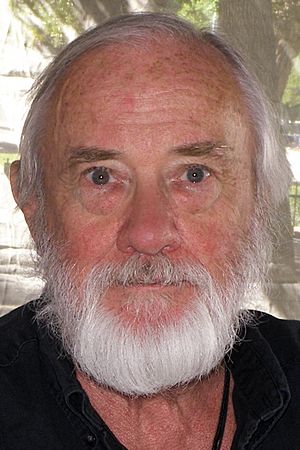 Robert Stone (August 21, 1937 – January 10, 2015) was an American novelist and journalist. He won the National Book Award for Fiction in 1975 for his novel Dog Soldiers. He was also twice a finalist for the Pulitzer Prize and once for the PEN/Faulkner Awards.

Stone was born in Brooklyn, New York. He was raised by his mother, who suffered from schizophrenia, until the age of six and was later raised in a Catholic orphanage. As a result of chain smoking, he had emphysema.

All content from Kiddle encyclopedia articles (including the article images and facts) can be freely used under Attribution-ShareAlike license, unless stated otherwise. Cite this article:
Robert Stone (novelist) Facts for Kids. Kiddle Encyclopedia.