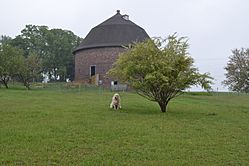 The Robert Weber Round Barn is a round barn located east of Durand, Illinois, United States along Illinois Route 75 in Harrison Township. The Weber barn was constructed in 1917 and features a roof designed and built by the Haas Brothers, who worked on other area round barns. The barn is 55 feet (17 m) in diameter and features a 24-foot (7.3 m) diameter central silo. The design of the Weber Round Barn stands out from other area round barns in its vitrified tile walls, a development used in later period American round barns. The Robert Weber Round Barn was added to the U.S. National Register of Historic Places in 1984.

The Robert Weber Round Barn was built in 1917 east of Durand, Illinois in Harrison Township along Illinois Route 75. When the building was nominated for inclusion on the U.S. National Register of Historic Places in 1984 it was owned by Robert Weber.

The barn building has a diameter of 55 feet (17 m) and contains a central silo with a diameter of 24 feet (7.3 m). Both the barn and silo walls are constructed of brown, hollow vitrified tile; each tile measures 1-foot (0.30 m) by 4¾ inches. The Weber Round Barn was designed as a bank barn, its loft is entered on the north side via an earthen ramp that leads to a metal framed door. Livestock entry is made on the west side of the barn through another metal framed door, in addition, all windows are metal framed. 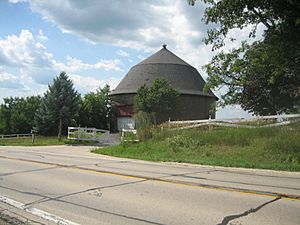 The round barn from a different angle

The single hip roof is supported by braces on either side of every rafter in a style promoted by the University of Illinois' Agricultural Experiment Station. The roof is covered in wooden shingles and capped by a small metal ventilator. The roof design and construction, by the Haas Brothers, connects it closely with round barns found in Stephenson County, Illinois that feature Haas Brothers construction. The Weber Barn was the last in the Stephenson County area that the Haas Brothers worked on. The Weber Round Barn does differ from the barns in neighboring Stephenson County in its vitrified tile wall. This type of tile wall demonstrates an important period in the evolution of round barn design. Vitrified tile was preferred by builders during the final period of American round barn construction.

The Weber Round Barn was nominated for the U.S. National Register of Historic Places in 1984 as part of the inaugural nomination through the Round Barns in Illinois Thematic Resources Multiple Property Submission. This means it met the criteria laid out beforehand for Illinois round barns. The building was listed on the National Register on February 2, 1984.

All content from Kiddle encyclopedia articles (including the article images and facts) can be freely used under Attribution-ShareAlike license, unless stated otherwise. Cite this article:
Robert Weber Round Barn Facts for Kids. Kiddle Encyclopedia.