Roberto Ivens (June 12, 1850 in Ponta Delgada – January 28, 1898 in Dafundo, Oeiras) was a Portuguese explorer of Africa, geographer, colonial administrator, and an officer of the Portuguese Navy.

Roberto Ivens was the son of Margarida Júlia de Medeiros Castelo Branco and Robert Breakspeare Ivens (1822-?). Margarida was of lower nobility and Roberto's Grandfather, William Ivens, was a merchant awarded the Ivens Arms by George III in 1816. Robert Breakspeare Ivens was a great-grandson of Thomas Hickling (Boston 1745-1836 Ponta Delgada) the American vice-consul in Ponta Delgada.

In 1861, Ivens attended the Navy School in Lisbon. At school Roberto was known as "Roberto of the Devil" and he became known as an intelligent young gentleman. He joined the Portuguese Navy in 1870 at the age of 20 and attended Escola Prática de Artilharia Naval in 1871. Ivens left for the Suez Canal in September of the same year, where he was the garrison of the Estefânia. 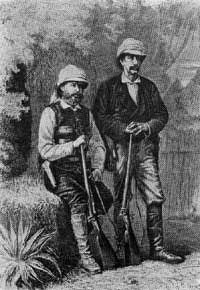 Ivens began his travels in Angola in 1872. On October 10, 1874, he completed three years of travels in the colonies. Returning to Portugal in January 1875, Ivens made examination for lieutenant. In April 1875, he sailed on the Duque de Terceira for Portuguese São Tomé and Príncipe and various ports of South America.

In 1876, Ivens set out for the United States, bringing Portuguese products to Philadelphia for the Centennial Exposition. His ancestor, Thomas Hickling, had been an ardent American revolutionary, and had in fact left Boston for the Azores following an argument with his loyalist father.

Ivens went on an expedition into the provinces of Angola and Mozambique beginning on May 11, 1877 and studied relations between hydrographic basins in Zambezi. His hydrographic studies are considered even today to be "amazingly perfect". In the same year he was promoted to the rank of first lieutenant.

Ivens went on an expedition on June 21, 1885 at Quelimane in Mozambique. Ivens, as requested by the King Luís I, and in the aftermath of the Berlin Conference, to travel between Angola and Mozambique, which ended in over 4,500 miles (about 8,300 km) of which 1/3 was uncharted in what was called "Contracosta".

For his service to Portugal, Roberto had the honor of being named aide-de-camp to King Luís. In 1895, he was made Officer of Military Order of Aviz and was nominated on October 17 as secretary of the Commission of Cartography.

A species of African lizard, Lubuya ivensii, is named in his honor.

He was also portrayed in the 500 Angolan escudo banknote issued in 1956.

All content from Kiddle encyclopedia articles (including the article images and facts) can be freely used under Attribution-ShareAlike license, unless stated otherwise. Cite this article:
Roberto Ivens Facts for Kids. Kiddle Encyclopedia.