Rock Island is a wooded island off the tip of Wisconsin's Door Peninsula at the mouth of Green Bay, in Door County, Wisconsin. The 974.87-acre (394.5 ha) (approximately 1.6 miles (2.6 km) long and 1.1 miles (1.8 km) wide) uninhabited island is almost entirely owned by the Wisconsin Department of Natural Resources, which maintains Rock Island State Park. It is the northernmost part of the town of Washington. 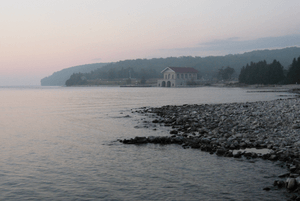 Rock Island was originally settled by Native Americans. European explorers and missionaries used it as one of several stops along the Grand Traverse route between upper Michigan and Wisconsin. The island was home to the first permanent European settlement on the Door peninsula, a small fishing village on the eastern shore. The settlers later relocated to nearby Washington Island, leaving the original village abandoned. On the North shore of the island you can still find the grave markers of some of the original villagers.

The island became a navigational landmark in 1836 following the construction of the Potawatomi Lighthouse on the northern tip.

In 1910 wealthy inventor Chester Thordarson purchased 775 acres (314 ha) of the island. 30 acres (12 ha) on the southwest side of the island were cleared in 1920 and Thordarson began construction of a summer estate, now known as the Thordarson Estate Historic District. His large boathouse, which is decorated with characters from the Norse Runic alphabet, is open to the public. The district also includes Thordarson's water tower.

The border between Wisconsin and Michigan was originally defined as "the most usual ship channel" into Green Bay from Lake Michigan but commercial routes existed both to the north and south of the island which lead to a border dispute. In 1936, the U.S. Supreme Court decision Wisconsin v. Michigan found that Rock and three other islands were part of Wisconsin.

The Wisconsin DNR purchased the island and buildings from Thordarson's heirs in 1965. Today the only other landholder on the island is the US Coast Guard, which maintains an automated navigation light near the old lighthouse.

The Rock Island Lighthouse was one of several the government had constructed at the time, and the woodworking around the door frames and windows are from these plans. The main structure is two stories, four including the basement and lantern room. The main two floors have walls of foot-thick limestone, while the lantern room is surrounded only by wood. The lighthouse also includes a summer kitchen, which the lighthouse keepers would use during the warmer months. This room is currently used as a gift shop and makeshift kitchen.

The lighthouse has been restored to its original condition by the Friends of Rock Island State Park including obtaining a replica of the Fresnel lens used in the original light. In the summer, volunteer docents give tours, staying for a week at a time. There is no running water or electricity in the lighthouse, but one room is heated.

On Rock Island, there are carvings which were made by workers who helped build the Thordarson buildings. These carvings can still be seen today.

Rock Island has flowers such as Trillium, Jack in the pulpit, and lady's slipper in abundance, as well as other plants, such as cow parsnip, Indian paintbrush, and poison ivy. The non-native Icelandic thyme was planted on the island by Thordarson.

Rock Island can be reached via a passenger ferry named the Karfi from Washington Island. No vehicles, including bicycles, are permitted on the island.

All content from Kiddle encyclopedia articles (including the article images and facts) can be freely used under Attribution-ShareAlike license, unless stated otherwise. Cite this article:
Rock Island (Wisconsin) Facts for Kids. Kiddle Encyclopedia.