Heracleum maximum, commonly known as cow parsnip, is the only member of the genus Heracleum native to North America. It is also known as American cow-parsnip, Indian celery, Indian rhubarb or pushki. It is sometimes referred to as Heracleum lanatum (or Heracleum lanatum var. asiaticum), which is regarded as a synonym. The genus name Heracleum (from Heracles) refers to the very large size of all parts of these plants. 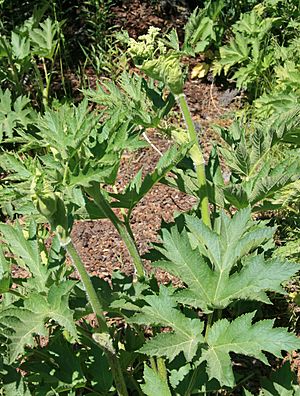 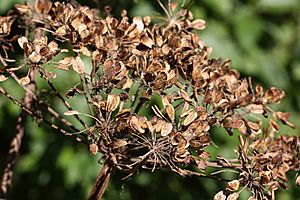 Cow parsnip is a tall herbaceous perennial plant, reaching heights of over 2 m (7 ft). The stems are hollow and densely hairy. The leaves are very large, up to 40 cm (16 in) across, and divided into lobes. Cow parsnip has the characteristic flower umbels of the carrot family (Apiaceae). The umbels are about 20 centimetres (8 in) across, flat-topped or rounded, and composed of small white flowers. Sometimes the outer flowers of the umbel are much larger than the inner ones. The seeds are 8–12 mm (0.3–0.5 in) long and 5–8 mm (0.2–0.3 in) wide.

It is commonly confused with Heracleum mantegazzianum (giant hogweed), which is a much larger plant that typically has purplish spots on the stems, as well as more sharply serrated leaves.

The Plant List (which was last updated in 2013) classified H. maximum, H. lanatum, and H. sphondylium subsp. montanum as distinct species. According to both the Integrated Taxonomic Information System (ITIS) or the National Plant Germplasm System (NPGS), H. lanatum and H. maximum are synonyms for Heracleum sphondylium subsp. montanum, a name proposed by Brummitt in 1971.

According to The Plant List and Plants of the World Online, Heracleum lanatum and Heracleum maximum are both accepted names, the latter with no infraspecific taxa. On the other hand, neither are recognized as accepted names by either the ITIS or NPGS. Besides H. lanatum and H. maximum, various scientific names have been attributed to this species,''''' including:

Synonyms of the grouping previously classified Heracleum lanatum include:

Several synonyms of Heracleum maximum are listed at Plants of the World Online: 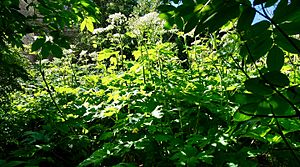 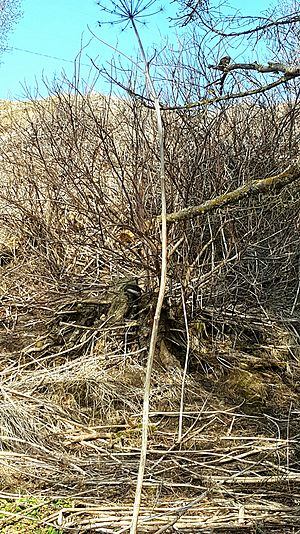 And the same spot in late winter, showing the white stalks of dead cow parsnip

The species is native to North America, being distributed throughout most of the continental United States (except the Gulf Coast and a few neighboring states), ranging from the Aleutian Islands and Alaska in the far northwest to Newfoundland on the east coast, extending south as far as California, New Mexico, Kansas, Ohio, and Georgia. It occurs from sea level to elevations of about 2,700 metres (9,000 ft). It is especially prevalent in Alaska, where it is often found growing amongst plants like devil's club, which is nearly identical to in size and somewhat similar in appearance, and monkshood, a very toxic flower. In Canada, it is found in every province and territory except Nunavut. It is listed as "Endangered" in Kentucky and "Special Concern" in Tennessee. The plant is also found in Siberia, East Asia, and the Kuril Islands.

The species is widely recognized as a valuable pasture plant for cows, sheep, and goats. It is also known to be important in the diets of numerous wild animals, especially bears, both grizzly bears and black bears. The thick flower stems, coming into season in early summer, can be peeled and eaten cooked when young; caution should be taken as the flowers resemble those of the extremely poisonous Cicuta maculata.

Indigenous North Americans have had a variety of uses for cow parsnip, often traveling long distances in the spring—80 kilometres (50 miles) or more—to find the succulent plant shoots. The young stems and leafstalks were peeled and usually eaten raw, while early American settlers cooked the plant. In terms of taste, texture, and nutrients, the peeled stalks resembled celery, which gave rise to the common name "Indian celery".

At least seven native groups in North America used the plant as a dermatological aid. It could be an ingredient in poultices applied to bruises or sores. A poultice prepared from the roots of cow parsnip was applied to swellings, especially of the feet. The dried stems were used as drinking straws for the old or infirm, or made into flutes for children. An infusion of the flowers can be rubbed on the body to repel flies and mosquitoes. A yellow dye can be made from the roots.

The plant contains furanocoumarins such as xanthotoxin, angelicin, pimpinellin and isopimpinellin, isoimperatorin, bergapten and isobergapten, 6‐isopentenyloxyisobergapten, and sphondin. In one study, the young leaves did not contain xanthotoxin, but older, senescing leaves contained "substantial amounts". Some of these furanocoumarins found in cow parsnip are known to have antimicrobial properties and are responsible for a rash producing erythematous vesicles (burn-like blisters) and hyperpigmentation that occurs after getting the clear sap onto one's skin. They are photosensitive, with the rash occurring only after exposure to ultraviolet light. Because of this, phytophotodermatitis causing skin blistering may occur after coming into contact with the sap on a sunny day. The scars and pigmentation from these blisters caused by some Heracleum species can last for months or years.

All content from Kiddle encyclopedia articles (including the article images and facts) can be freely used under Attribution-ShareAlike license, unless stated otherwise. Cite this article:
Cow parsnip Facts for Kids. Kiddle Encyclopedia.