The track was built in 1947 by a farmer and group of investors. Hugh Deery eventually bought into the speedway and was the sole owner by 1966. It is run by his widow, Jody Deery (as of 2013). It opened in 1948 as a midget car racing venue. Despite a death in the pits at the speedway several weeks after opening, on June 16, 1948, the track continued operation. Rockford Speedway is known for being the first track to develop an economical late model program as well as being an early adopter of the short track Saturday night racing program. Another one of Hugh Deery's innovations was to host a season-ending special event (which he titled the National Short Track Championship). He was inducted in the Illinois Stock Car Hall of Fame in 2013. Jody Deery is one of a handful of track operators on the 22-person nominating committee for the NASCAR Hall of Fame.

Over the years the track has also hosted concerts. On August 17, 1980, as a part of 'Rockford Speedway Jam 1980', Black Sabbath performed at the speedway as a part of their Heaven & Hell Tour.

The track is an asphalt-paved nominal 1/4 mile. The measured length of the track is 0.29167 miles (0.46940 km). It is highly banked at the turns and relatively flat on the front and back stretches. It is banked at 22 degrees in the 50-foot (15 m)-wide corners and eight degrees in the 40-foot (12 m)-wide straightaways. Inside the 1/4 mile oval track is a figure eight track. 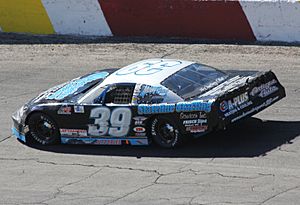 Several notable people started their racing careers at Rockford. NASCAR crew chief Chad Knaus was his father's crew chief for his championship race car. NASCAR Sprint Cup Series official John Darby got his start at Rockford in 1971 as an owner of a street stock. In 1976 he became crew chief for a late model that he owned which won the 1977 championship. He stopped owning the racecar in 1982 and became a track official. He moved up the NASCAR ranks as a technical official, and by 1994 he was the director for the NASCAR Busch Series (now Xfinity Series). After three years he was named the NASCAR's Sprint Cup Series director of competition.

In 2016 the speedway hosted the World of Outlaws sprint cars and late models in an event called the Outlaw Clay Classic. The track was covered in clay for the first time in the track's history for two nights and racing was held on the track's temporary surface. 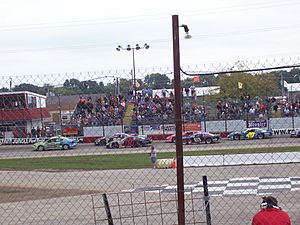 The track holds its annual National Short Track Championship (NSTC) the weekend closest to October 1st. The three day event usually has 12 divisions racing. Track promoters decided to host the first 200 lap event in late 1966 to pit the best drivers in Chicagoland against the best drivers in the Central Wisconsin Drivers Association. Drivers competing at the event are primarily from Illinois and Wisconsin, although drivers from other states often participate. The event was sanctioned by ARTGO for several years, and it became part of the CRA Super Series tour in 2004. In 2005, it was part of the ASA Late Model Series. It was not part of any tour for several years until the ASA Midwest Tour took over in 2011. As of 2012, there was no sanctioning body for the Super Late Models running at the event.

Joe Shear was the first driver to win eight NSTCs and Steve Carlson tied his record in 2011. Other multiple winners include Jeremy Lepak, Dick Trickle, and Eddie Hoffman.

The first event was won by Wisconsin short track racer Trickle by a lap over Chicagoland stock-car champion Roy Martinelli. Trickle was billed as the winningest short track driver in history with estimates of his win total between 1,000 and 1,200 races. Years later, Trickle commented, "I really do treasure that one in 1966. There were a lot of behind-the-scenes things that went on there. Number one, I had never run outside my own backyard, you might say, which is the central Wisconsin area. I never ran somewhere except in my own little circuit, but I had won there. The first time I ever stepped out of the central Wisconsin area was to the Rockford Nationals in 1966." 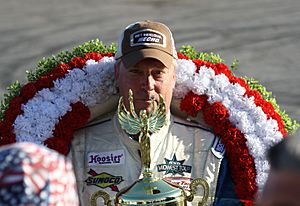 Steve Carlson after winning the 2011 race, his eighth

All content from Kiddle encyclopedia articles (including the article images and facts) can be freely used under Attribution-ShareAlike license, unless stated otherwise. Cite this article:
Rockford Speedway Facts for Kids. Kiddle Encyclopedia.