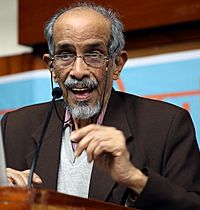 Roddam Narasimha (20 July 1933 – 14 December 2020) was an Indian aerospace scientist and fluid dynamicist. He was a Professor of Aerospace Engineering at the Indian Institute of Science (IISc) from 1962 to 1999. He was Director of the National Aerospace Laboratories (NAL) from 1984 to 1993 and the Chairman of the Engineering Mechanics Unit at Jawaharlal Nehru Centre for Advanced Scientific Research from 2000 to 2014.

Narasimha died of a cerebral hemorrhage on 14 December 2020 in Bangalore, Karnataka at the age of 87.

All content from Kiddle encyclopedia articles (including the article images and facts) can be freely used under Attribution-ShareAlike license, unless stated otherwise. Cite this article:
Roddam Narasimha Facts for Kids. Kiddle Encyclopedia.