Rodney Parade is a stadium in the city of Newport, South Wales, owned and operated by the Welsh Rugby Union. It is located on the east bank of the River Usk in Newport city centre. The ground is on Rodney Road, a short walk from the city's central bus and railway stations via Newport Bridge or Newport City footbridge. There is no spectator car park at the ground but a number of multi-storey car parks are nearby. 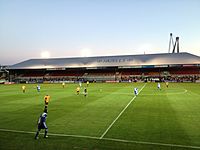 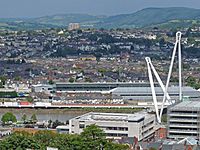 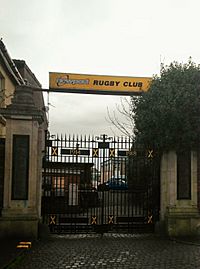 Rodney Parade has two covered stands: the two-tier Compeed Stand (west) and the Bisley Stand (east) which are along the touchlines of the pitch. The upper tier of the west stand is seated with 1,996 seats, including 40 Press seats and the lower tier is a standing terrace. The east stand is all-seated with a 2,526 capacity including 144 seats in 13 hospitality boxes, food/drink outlets and a gantry for television cameras. The TV cameras are therefore pointing westward and often show the sun setting over Newport city centre.

The hospitality suite is located in the North End of the East Stand on the upper level.

The rugby ticket office and club shop is located at the north end of the East Stand accessed via the main gate to the ground (Gate 4) off Grafton Road. The Newport County ticket office is a separate building just inside Gate 4.

To the north of the North Terrace is a floodlit grass training area. Further north, parallel to Grafton Road, is the Rodney Hall function room and the rugby clubhouse/office facilities.

In 1875, the Newport Athletic Club was created, and two years later they secured the use of land at Rodney Parade from Godfrey Morgan, 1st Viscount Tredegar, for their cricket, tennis, rugby and athletics teams. In October 1879, Newport RFC played Cardiff RFC in a floodlit game at Rodney Parade. It was the first ground in Wales to have floodlights installed.

Newport rugby club enjoyed six highly successful seasons, being unbeaten during that time. The team sustained their first defeat in the 1870s, but were again unbeaten in seasons 1891-2 and 1922-3. Monmouthshire County Cricket Club played at Rodney Parade from 1901 to 1934. Newport RFC provided internationals for every one of the four home countries at Rodney Parade, as well as South Africa. Newport were once scheduled for a regular fixture, against Bristol – a team drawn from Welsh, English, Irish and Scottish internationals. The powerful All Blacks of 1924, and the strong Springboks of 1960, were considered fortunate to evade defeat at Rodney Parade.

The cricket ground, which was on the south side of the stadium, no longer exists, because the new Maindee primary school was built on the site in 1993. Newport Cricket Club relocated to the Newport International Sports Village.

Following the introduction of regional rugby union teams in Wales, the Newport Gwent Dragons regional team was formed on 1 April 2003 and shared Rodney Parade with Newport RFC from then onwards.

On 4 September 2007, it was announced that the Rodney Parade site was due to be redeveloped into a 15,000-capacity stadium by the beginning of the 2010–11 rugby union season. The redevelopment was backed by Newport City Council, Newport Unlimited, Newport RFC and Newport Gwent Dragons. The application received planning consent on 11 March 2009. The plan included construction of covered stands at the north and south ends and the provision of cover on the stretch of the west touchline terrace. In August 2010, it was announced that the target finish date for the first phase had been put back to the beginning of the 2011–12 rugby union season with the full redevelopment planned to take several years. The new east stand was opened in October 2011, and named the Bisley Stand for sponsorship purposes.

In May 2012, it was agreed that Newport County football club would move from Newport Stadium and play its home fixtures at Rodney Parade as part of an initial three-year deal, meaning that the stadium would host association football matches on a regular basis for the first time. In February 2013, Newport County agreed a further 10-year lease to play at Rodney Parade.

In the summers of 2013 and 2014, new drainage and irrigation systems were installed under the grass playing surface. Despite that, serious drainage problems occurred at the end of 2016. Newport County's matches against Barnet on 3 September and Morecambe on 10 December were abandoned at half-time because the pitch was waterlogged and the English Football League stepped in to help identify the problem.

In March 2017, sale of the ground to the Welsh Rugby Union was agreed following a vote of Newport RFC shareholders. The takeover was completed on 27 June 2017 and work started to install a hybrid grass pitch for the 2017–18 rugby and football season.

In March 2021 Newport County were permitted by the EFL to move two home matches to Cardiff City Stadium due to the poor condition of the Rodney Parade pitch. The Dragons also switched three home matches to the Millennium Stadium, Cardiff. Scheduled pitch maintenance had been cancelled in Summer 2020 by the ground owners WRU due to the COVID-19 pandemic in the United Kingdom.

It has hosted one match for the Wales women's national football team:

All content from Kiddle encyclopedia articles (including the article images and facts) can be freely used under Attribution-ShareAlike license, unless stated otherwise. Cite this article:
Rodney Parade Facts for Kids. Kiddle Encyclopedia.