The name "Woolos" is a corruption of Gwynllyw, the 5th-century Welsh saint who first founded a religious establishment on the site.

The present building has sections that date from Anglo-Saxon times. In the 9th century the wooden church formerly on the site was rebuilt in stone. This indicates the importance of the cult of Saint Gwynllyw and the wealth of his shrine as stone buildings were unusual in Wales at this point. Part of this building is now incorporated into St Woolos cathedral as the Galilee chapel now at the west end of the Cathedral.

Circa 1050 the church was attacked by pirates and left in ruins. 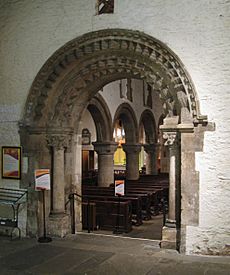 Circa 1080 the Normans built a new nave to the east of the Saxon ruins, and a lean-to south aisle, building a new entrance archway through the Saxon wall. Circa 1200 the Saxon church was repaired so the Norman entrance became an internal archway. 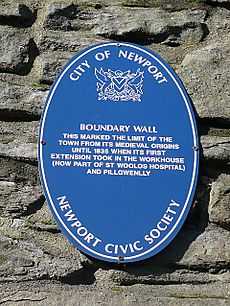 It was badly damaged in 1402 when Newport was attacked by the forces of Owain Glyndŵr and underwent a major rebuilding including the addition of the tower.

It also seems to have been damaged in the English Civil War period when a statue above the main entrance representing a benefactor of the church seems to have lost its head. It is either Jasper Tudor, the Earl of Pembroke, or Humphrey Stafford, 1st Duke of Buckingham as both helped rebuild it after Glyndwr's attack.

The cathedral has been partially rebuilt or extended in every period up to the 1960s, and is currently undergoing much-needed repairs. An appeal fund was started in 2006 to raise the £1.5m needed to rescue and repair the building, and is still ongoing. Repairs to the roof started in February 2011 by Newport-based contractor Instaat Projects Ltd, although further fundraising is necessary and other restoration is required to prevent serious dilapidation.

In 1929 St Woolos became the pro-cathedral of the new Diocese of Monmouth, attaining full cathedral status in 1949.

With the enthronement of Rowan Williams as Archbishop of Wales in February 2000, the cathedral became the Metropolitan Cathedral for Wales for the third time in its life. The cathedral continues to serve Wales, the diocese and the City of Newport; it also serves a large parish.

It is also a place of pilgrimage for political and industrial historians – a plaque in the church yard commemorates the bloody suppression of the Chartist rebellion here in 1839.

The Dean of Monmouth between March 1997 and May 2011 was the Very Reverend Dr. Richard Fenwick. In May 2011 Dr. Fenwick was consecrated as the Bishop of St. Helena within the Anglican Church of South Africa. The Diocese covers the islands of Saint Helena and Ascension in the Atlantic Ocean.

The Reverend Canon Jeremy Winston was installed as Dean of Monmouth on 10 September 2011, but died from a brain tumour on 22 November. On 13 January 2012 it was announced that his successor was to be the Reverend Lister Tonge. He was installed on 31 March 2012.

In June 2013, Dominic Walker OGS retired as the Bishop of Monmouth. The current bishop is Richard Pain, installed on Friday 18 October 2013.

A specification of the organ can be found on the National Pipe Organ Register The current Organist and Choirmaster is Dr. Emma Gibbins, who has been in post since 2015. The current assistant organist is Jeremy Blasby, appointed in 2010. The choir is made up of 16 boys and 12 men, with supernumerary men and boys participating in services at various times.

All content from Kiddle encyclopedia articles (including the article images and facts) can be freely used under Attribution-ShareAlike license, unless stated otherwise. Cite this article:
Newport Cathedral Facts for Kids. Kiddle Encyclopedia.