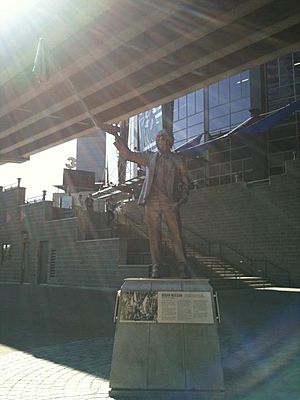 Roger Paul Neilson, CM (June 16, 1934 – June 21, 2003) was a National Hockey League coach, and was responsible for many victories in the game. He is a member of the Hockey Hall of Fame in the builder category.

Born in Toronto, Ontario, after attending North Toronto Collegiate Institute, Neilson's coaching career began as a student at McMaster University in Hamilton, Ontario, and continued upon graduation with a degree in Physical Education in both hockey and baseball.

Neilson died on June 21, 2003 from bone and skin cancer in Peterborough, Ontario, aged 69.

All content from Kiddle encyclopedia articles (including the article images and facts) can be freely used under Attribution-ShareAlike license, unless stated otherwise. Cite this article:
Roger Neilson Facts for Kids. Kiddle Encyclopedia.