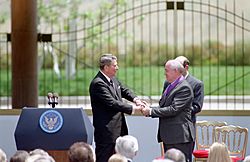 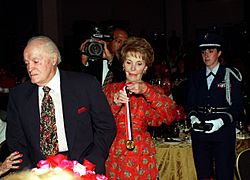 The Ronald Reagan Freedom Award is the highest civilian honor by the Ronald Reagan Presidential Foundation. The award is given to "those who have made monumental and lasting contributions to the cause of freedom worldwide."

Today, the award is given by Former First Lady Nancy Reagan on behalf of her husband, who died in June 2004. The award was first given in 1992, by President Ronald Reagan himself, as well as in 1993, but in 1994 Mrs. Reagan presented the award instead of her husband due to his poor health.

In order to receive this honor, the recipient must "have made monumental and lasting contributions to the cause of freedom worldwide," as well as "embody President Reagan's lifelong belief that one man or woman truly can make a difference."

All content from Kiddle encyclopedia articles (including the article images and facts) can be freely used under Attribution-ShareAlike license, unless stated otherwise. Cite this article:
Ronald Reagan Freedom Award Facts for Kids. Kiddle Encyclopedia.