Rosemount is a city in Dakota County, Minnesota, United States, on the southern edge of the Twin Cities Metropolitan Area. The population was 25,650 at the 2020 census.

Rosemount was established as a township in 1858 and incorporated as a city in 1972, encompassing the old village of Rosemount and Pine Bend. According to the city's website, there was some debate over whether to name the township Saratoga or Rosemount, with the latter finally chosen to reflect the town's Irish heritage and remain in keeping with the name given to the post office a few years earlier. In the 1940s it was home to a military gunpowder plant, Gopher Ordnance Works.

Rosemount is the home of the Rosemount High School "Irish" and Dakota County Technical College, a member of the Minnesota State Colleges and Universities system. 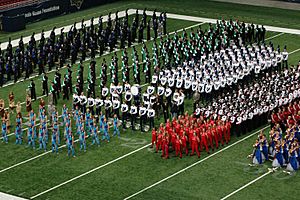 There were 7,587 households, of which 46.5% had children under the age of 18 living with them, 65.0% were married couples living together, 8.9% had a female householder with no husband present, 4.0% had a male householder with no wife present, and 22.0% were non-families. 16.6% of all households were made up of individuals, and 5.2% had someone living alone who was 65 years of age or older. The average household size was 2.88 and the average family size was 3.27.

Despite the relatively small population of Rosemount, they are the only multiple-time hosts of the USA Broomball National Championships, welcoming competing teams in 2001, 2002, 2003, and 2005. Three different rinks in the area have been used to host games in the men's and co-rec divisions. Rosemount also holds Leprechaun Days, a 10-day-long community festival with many events.

All content from Kiddle encyclopedia articles (including the article images and facts) can be freely used under Attribution-ShareAlike license, unless stated otherwise. Cite this article:
Rosemount, Minnesota Facts for Kids. Kiddle Encyclopedia.