Rosie the Shark facts for kids 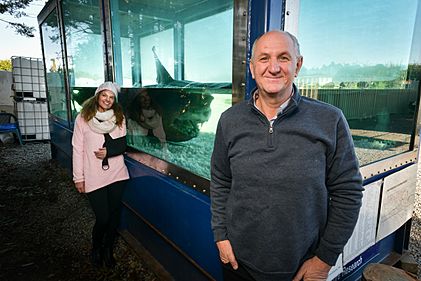 Tom Kapitany and Sharon Williamson standing with Rosie the Shark at the Crystal World Exhibition Centre.

Rosie the Shark is a preserved great white shark located at Crystal World Exhibition Centre in Devon Meadows, Australia. It was originally preserved in a glass tank of formaldehyde on display at Wildlife Wonderland in Bass, Victoria which closed in 2012 due to animal welfare concerns and operating without appropriate licences.

Crystal World Exhibition Centre's director Tom Kapitany took ownership of the shark in 2019 in response to trespassers of the derelict wildlife park vandalising the shark's enclosure, destruction of the vitrine (showcase) raising concerns of a potential biohazard.

As the shark was being transported to Wildlife Wonderland in Victoria, frozen in a refrigerated truck, it was impounded by the Government of South Australia because a woman had been reported missing, requiring an autopsy of the shark at the South Australian Museum. Following the autopsy, the great white shark was stuffed with dacron and preserved in a formaldehyde solution in a custom built tank.

Founder of Wildlife Wonderland John Matthews recalled the operation of ownership as "It was a huge logistical operation, working with Melbourne Museum, and all up cost us about $500,000," and further stating "We had to build a purpose-built room and the roof had to be removed and the shark craned in and put into a new, sealed tank."

In 2012, Wildlife Wonderland were reported to have been operating their business without appropriate licenses, forcing the wildlife park to cease business and surrender all animals to RSPCA Australia and the Department of Sustainability and Environment Victoria.

In November 2018, a video released on YouTube by urban explorer Luke McPherson showed inside the decaying wildlife park and later stumbling upon the shark tank. Months after, the YouTube video gained millions of views, prompting a rise in trespassing into the property to view the shark, with vandals also damaging and graffitiing the tank and its surroundings.

Local police issued public warnings of the dangers of visiting the shark, following the damage done to the shark's vitrine which caused carcinogenic formaldehyde vapours to leak from the tank. 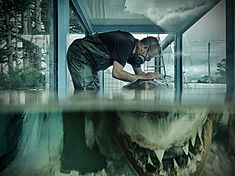 Tom Kapitany directed the restoration efforts of Rosie the Shark at the Crystal World Exhibition Centre located at 13 Olive Road, Devon Meadows, Victoria, Australia. Staff of the exhibition centre have flushed the formaldehyde out of the enclosure to replace it with glycerol as a safer alternative for the preservative solution.

Delays were encountered along the restoration process due to the cost involved in filling the tank with glycerol, Tom Kapitany noted as saying "Ultimately we'll need 19,500 litres, which will cost us $60,000 AUD".

A documentary is being filmed by Flying Fox Productions that follows the story Rosie the Shark's history, destruction, rescue, and restoration.

Initially upon taking ownership of Rosie the Shark, Kapitany sought advice from a shark and taxidermy expert, stating "At the beginning we consulted a shark and taxidermy expert about the best way to preserve her and there was no easy way to do it. Everything had a compromise and a problem". He added, upon advice from glass experts regarding the smashed glass panels around the enclosure, "There are four layers of glass and just one layer is broken, so we’re keeping it because it’s all part of the story".

The shark has since been freely on display at Crystal World Exhibition Centre while restoration efforts continue, with constant monitoring and injections of glycerine into the exposed parts of the shark until the tank is finally completely filled with the preservative.

All content from Kiddle encyclopedia articles (including the article images and facts) can be freely used under Attribution-ShareAlike license, unless stated otherwise. Cite this article:
Rosie the Shark Facts for Kids. Kiddle Encyclopedia.