Kids Encyclopedia Facts
Not to be confused with Rhymney. 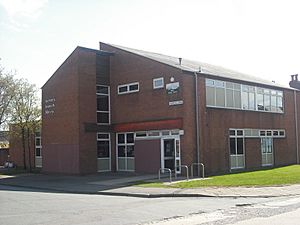 This is a predominantly residential area with a variety of social and private housing. There are many shopping outlets on Newport Road as well as local shops at the top of Rumney Hill and on Wentloog Road, Countisbury Avenue in Llanrumney also. New industrial and business estates have been developed alongside existing ones on Lamby Way providing employment opportunities.

Within the older sectors of the Rumney area are places of interest, such as the historic Rumney Pottery which is still in use today and also the remains of the old Rumney Castle which was a major stronghold on the South Wales coast. The remains of the castle were excavated in the late 70s and early 80s. An old quarry which is now being used as a children's park is situated off Ty Mawr Road (Ty Mawr – Welsh language for "Big House")

The Church in Wales parish church of St Augustine, dating from the 12th century, is located on the north side of Church Road. Schools in the area include Eastern High School and St Illtyd's Catholic High School.

The area is on Cardiff Bus' 44/45 routes between Cardiff central bus station and St Mellons and the 49/50 routes to Llanrumney. It is also served by the 30 service to Newport bus station.

All content from Kiddle encyclopedia articles (including the article images and facts) can be freely used under Attribution-ShareAlike license, unless stated otherwise. Cite this article:
Rumney, Cardiff Facts for Kids. Kiddle Encyclopedia.