Sagittaria is a genus of about 30 species of aquatic plants whose members go by a variety of common names, including arrowhead, duck potato, katniss, Omodaka (沢瀉 in Japanese), swamp potato, tule potato, and wapato (or wapatoo). Most are native to South, Central, and North America, but there are also some from Europe, Africa, and Asia.

Sagittaria plant stock (the perennial rhizome) is a horizontal creeper (stoloniferous) and obliquely obovate, the margins winged, with apical or ventral beak; in other words, they are a small, dry, one-seeded fruit that do not open to release the seed, set on a slant, narrower at the base, with winged edges, and having a "beaked" aperture (one side longer than the other) for sprouting, set above or below the fruit body.

One of the names for this plant is derived from the edible underwater tuber that the plant produces. In late fall or early spring, disturbing the aquatic mud in which the plant grows will cause its small tubers to float to the surface where they can be harvested and then boiled.

Many species have edible roots, prized for millennia as a reliable source of starch and carbohydrates, even during the winter. Roots are eaten cooked, and are harvested by hand or by treading with one's feet in the mud. They are easy to propagate by replanting the roots. 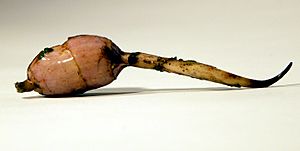 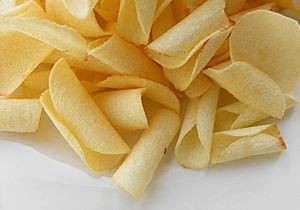 Crisps (chips) made from tuber

All content from Kiddle encyclopedia articles (including the article images and facts) can be freely used under Attribution-ShareAlike license, unless stated otherwise. Cite this article:
Sagittaria Facts for Kids. Kiddle Encyclopedia.