St. Helena Parish (French: Paroisse de Sainte-Hélène) is a parish in the U.S. state of Louisiana. As of the 2010 census, the population was 11,203. Its seat is Greensburg. The parish was created in 1810.

The parish is one of the eight "Florida Parishes," areas that were once part of colonial West Florida. It was annexed to the Territory of Orleans in 1810, after the short-lived Republic of West Florida capitulated to the United States. In 1832, the southern section of the parish was taken to form Livingston Parish; the courthouse was moved from Montpelier to Greensburg, where it remains today. St. Helena lost another portion of land in 1866, which was added to land from Washington and Livingston Parishes in 1868, to form Tangipahoa Parish.

From 1964 to 1984, St. Helena Parish was represented in the Louisiana State Senate by the Democrat businessman W. E. "Bill" Dykes. In 1983, as a casualty of redistricting, Dykes bowed out of contention in a race which would have pitted him against long-term Senate President Sixty Rayburn of Bogalusa, Louisiana.

In recent years, St. Helena experienced a series of scandals involving parish officials. In 1997, Sheriff Eugene Holland was found guilty of misuse of government funds and property and using prison inmates for personal labor. His replacement, Chaney L. Phillips (born c. 1950), served for only a year as sheriff before he was convicted of fraud and money laundering that he had committed while serving as the parish assessor. He was given an eight-year prison sentence on conviction in 1998 of having placed a political supporter on his assessor office staff; the individual performed no duties. Phillips was assigned to the Federal Correctional Institution in Englewood, Colorado. He did not serve the full eight years; he was released on May 23, 2003.

Ronald "Gun" Ficklin took over the sheriff's office from Phillips in 1998, but on February 5, 2007, Ficklin himself pleaded guilty on multiple counts involving his role in operating "chop shops" — reselling stolen automobiles and parts — using state prisoners to staff these activities and as a pit crew for his race car. 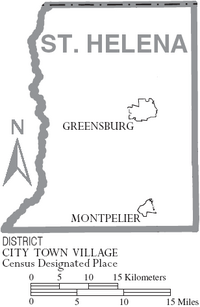 St. Helena Parish contains the only meteorite impact crater reported from the state of Louisiana. This suspected impact crater is a roughly circular depression about 1.2 miles/2 km in diameter. Shocked quartz and intensely fractured quartz have been recovered from fractured and possibly altered sediments comprising its rim. Its age is estimated to be between 11-30 ka. It lies about 5.8 miles/9.3 kilometers southwest of Greensburg, in the southwest corner of the parish. Louisiana Highway 37 cuts through the northern edge of this feature.

All content from Kiddle encyclopedia articles (including the article images and facts) can be freely used under Attribution-ShareAlike license, unless stated otherwise. Cite this article:
Saint Helena Parish, Louisiana Facts for Kids. Kiddle Encyclopedia.