Sami Hannu Antero Kapanen (born 14 June 1973) is a Finnish professional ice hockey coach and former player. He played 12 NHL seasons for the Hartford Whalers, Carolina Hurricanes and Philadelphia Flyers. He is the majority owner of KalPa in the Finnish league. Kapanen's son, Kasperi Kapanen, is a member of the Pittsburgh Penguins.

Kapanen was drafted 87th overall in the 1995 NHL Entry Draft by the Hartford Whalers. His first NHL season was in 1995–96, when he played 35 games with Hartford. The Whalers relocated to become the Carolina Hurricanes following the 1996–97 season and Kapanen averaged 24 goals and 35 assists in his next five seasons with Carolina. His best season was in 2001–02 when he scored 27 goals and 42 assists for 69 points. He was selected twice for the NHL All Star Game (2000, 2002), winning the Individual event for "the Fastest skater" on both occasions.

On 7 February 2003, Kapanen was traded to the Philadelphia Flyers along with Ryan Bast for Pavel Brendl and Bruno St. Jacques. In his first two seasons with Philadelphia, Kapanen played 31 playoff games, scoring 17 points.

Since 2003, Kapanen has also been the majority owner of the Finnish hockey team KalPa Kuopio, the same club that gave him his start as a professional. One of the minority owners is Kimmo Timonen who in 2007 became Kapanen's teammate on the Flyers. Following the 2007–08 season, Kapanen announced that he was retiring from the NHL and he would be returning to Finland to play for KalPa. He retired as a player after the 2009–10 season.

On 7 April 2011, Kapanen announced that he would be doing a comeback as a player in KalPa, playing on a two-year contract. He, however, stepped down as the club's chief executive officer (CEO) and instead handed that role over to his brother Kimmo Kapanen. 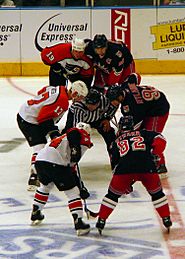 Kapanen (bottom left) playing for the Flyers against the New York Rangers in 2007.

All content from Kiddle encyclopedia articles (including the article images and facts) can be freely used under Attribution-ShareAlike license, unless stated otherwise. Cite this article:
Sami Kapanen Facts for Kids. Kiddle Encyclopedia.