San Carlos is an upper-middle-class neighborhood in the eastern area of San Diego, California. It borders the neighborhoods of Del Cerro, Tierrasanta, and Allied Gardens, the city of La Mesa, and Mission Trails Regional Park. The "jewel" of San Carlos is Cowles Mountain. 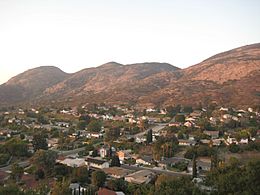 San Carlos is geographically defined largely by its proximity to Mission Trails Regional Park and to the man-made reservoir Lake Murray. The area consists primarily of single-family homes.

The area was developed by Carlos Tavares, after whom it was named.

Community centers include the city-owned San Carlos Recreation Center, which opened in 1970. There also is a privately owned park known as Del Cerro Park and Pool. There used to be a nonprofit performance venue and community room called Casey's Place, but in 2009 it was closed due to financial problems. It has since become an auto repair shop.

All content from Kiddle encyclopedia articles (including the article images and facts) can be freely used under Attribution-ShareAlike license, unless stated otherwise. Cite this article:
San Carlos, San Diego Facts for Kids. Kiddle Encyclopedia.