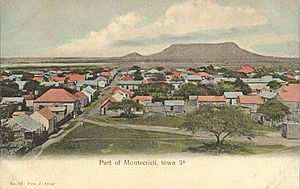 The name comes from the name given by Columbus on 4 January 1493 to the mountain known now as El Morro: Monte Cristo or Monte Christi ("Mountain of Christ").

When the city was founded again in 1751, the name was changed to the present one, San Fernando de Monte Cristi, after Ferdinand VI, King of Spain.

The city was founded by Juan de Bolaños in 1533; but Rodríguez says that it was in 1545 by Francisco Mesa. Some families from the Canary Islands came to live here. Because it was too dry and hot, there was not possibility of any kind of farming, except some cattle raising, and the city was developed as a port.

Monte Cristi is in the northwestern end of the Cibao Valley, near the Montecristi Bay. The city is just to the north of the mouth of the River Yaque del Norte.

To the north of the city is the western end of the Cordillera Septentrional ("Northern mountain range"); the last mountain of this range is El Morro.

Monte Cristi has a tropical savanna climate (Köppen-Geiger classification: As) with a pronounced dry season on summer, and an wet season on winter.

The most important economic activities in the municipality are fishing and salt production. Farming is important near the River Yaque del Norte, and the main crops are bananas and rice.

Tourism is also important here, with the different beaches near the city and people that come here for fishing.

All content from Kiddle encyclopedia articles (including the article images and facts) can be freely used under Attribution-ShareAlike license, unless stated otherwise. Cite this article:
San Fernando de Monte Cristi Facts for Kids. Kiddle Encyclopedia.