José Julián Martí Pérez (January 28, 1853 – May 19, 1895) was a Cuban national hero and an important figure in Latin American literature. During his life, he worked as a poet, essayist, journalist, translator, professor, and publisher. He was very politically active, and is considered an important revolutionary philosopher and political theorist.

Through his writings and political activity, he became a symbol of Cuba's bid for independence against Spain in the 19th century, and is referred to as the "Apostle of Cuban Independence." From adolescence, he dedicated his life to the promotion of liberty, political independence for Cuba, and intellectual independence for all Spanish Americans; his death was used as a cry for Cuban independence from Spain by both the Cuban revolutionaries and those Cubans previously reluctant to start a revolt.

Martí was also used as a figurehead by the Cuban government throughout the government of Fidel Castro, and his writings were commonly cited as supporting socialism within Castro's administration. 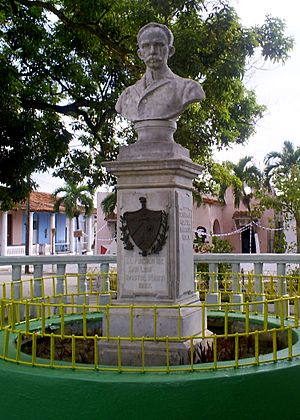 Born in Havana, Martí began his political activism at an early age. He traveled extensively in Spain, Latin America, and the United States, raising awareness and support for the cause of Cuban independence. His unification of the Cuban émigré community, particularly in Florida, was crucial to the success of the Cuban War of Independence against Spain. He was a key figure in the planning and execution of this war, as well as the designer of the Cuban Revolutionary Party and its ideology. He died in military action during the Battle of Dos Ríos on May 19, 1895.

Martí is considered one of the great turn-of-the-century Latin American intellectuals. His written works include a series of poems, essays, letters, lectures, novel, and a children's magazine. He wrote for numerous Latin American and American newspapers; he also founded a number of newspapers. His newspaper Patria was an important instrument in his campaign for Cuban independence. After his death, one of his poems from the book, "Versos Sencillos" (Simple Verses) was adapted to the song "Guantanamera", which has become the definitive patriotic song of Cuba.

The concepts of freedom, liberty, and democracy are prominent themes in all of his works, which were influential on the Nicaraguan poet Rubén Darío and the Chilean poet Gabriela Mistral.

His name has been chosen for several institutions or NGOs from various countries, such as Romania, where a public school from Bucharest and the Romanian-Cuban Friendship Association from Targoviste are both named "Jose Marti". A gigantic statue was unveiled on his 123rd birth anniversary and President Raul Castro was present at the ceremony.

All content from Kiddle encyclopedia articles (including the article images and facts) can be freely used under Attribution-ShareAlike license, unless stated otherwise. Cite this article:
José Martí Facts for Kids. Kiddle Encyclopedia.