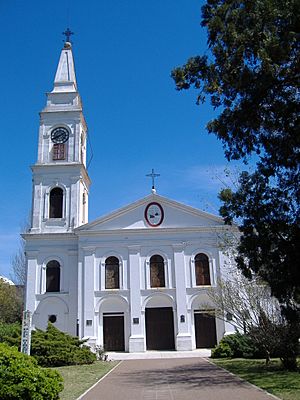 San Lorenzo is a city in the south of the province of Santa Fe, Argentina. It is 23 km north of Rosario, on the western shore of the Paraná River. It is the head town of the San Lorenzo Department. As of 2001 there were about 43,500 people.

San Lorenzo has no certain foundation date. In 1984 the Municipal Council decided to choose 6 May 1796 as the day of formations. This is the date when Franciscan friars came and started the evangelization of the area.

The city was the stage of the Battle of San Lorenzo on 3 February 1813. Troops loyal to the Spanish Crown were defeated by local revolutionaries under General José de San Martín. The 18th century San Carlos Monastery has a museum about this battle. The battle was the first in the Argentine War of Independence.

San Lorenzo is the birthplace of Argentina captain Javier Mascherano.

All content from Kiddle encyclopedia articles (including the article images and facts) can be freely used under Attribution-ShareAlike license, unless stated otherwise. Cite this article:
San Lorenzo, Santa Fe Facts for Kids. Kiddle Encyclopedia.