Each of the separate mountain ranges includes flat-topped mesas and hills, and the ranges trend from the southwest to the northeast. Because the individual hills rise from the floor of the San Luis Valley, which is about 7,500 feet (2,300 meters) in elevation, they appear more as hills than mountains, despite rising to eight or nine thousand feet above sea level.

The Hills are all within the Sangre de Cristo National Heritage Area. 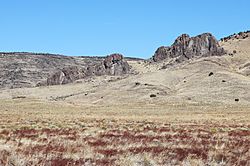 The Manassa Dike. Part of Flat Top is visible on the left.

The hills are the exposed parts of an intra-rift horst. They are capped by Miocene basalts of the Hinsdale Formation. The basalt is underlain by Oligocene andesite and dacite volcanic deposits of the lower Conejos Formation.

The public lands in the San Luis Hills are not developed for recreation. However, some informal hiking trails exist, and mountain climbing and bouldering are possible, especially around the Manassa Dike on south side of Flat Top.

The San Luis Hills Wilderness Study Area occupies a 10,883-acre (4,404-hectare) tract of land in the Piñon Hills. The wilderness study area was established in 1980 and is owned by the Bureau of Land Management.

In 2016, the Western Rivers Conservancy got funding from the Conservation Alliance to purchase a 17,019-acre (6,887-hectare) tract in the Brownie Hills on both sides of the Rio Grande, some of it adjacent to or overlapping with the Rio Grande Natural Area. The plan is to transfer the land to Costilla County, which will manage it for wildlife habitat, agriculture, and public open space.

All content from Kiddle encyclopedia articles (including the article images and facts) can be freely used under Attribution-ShareAlike license, unless stated otherwise. Cite this article:
San Luis Hills Facts for Kids. Kiddle Encyclopedia.