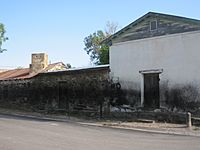 The Jesus Trevino Rancho is a national landmark at the intersection of Trevino and Uribe streets in San Ygnacio, Texas. This north side of the structure was accidentally peppered with tar by a truck early in 2010 and has now been restored. 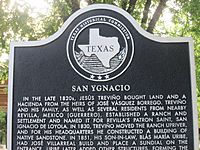 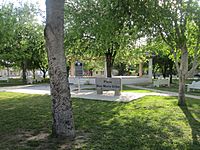 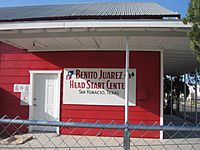 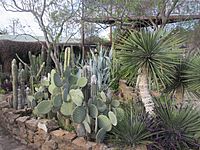 Cactus garden at the Zaragosa house 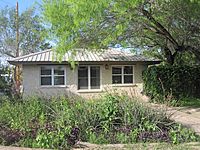 Office of the River Pierce Foundation, designed by Randy T. Rickels (1938-2004) of Austin.

San Ygnacio is a census-designated place (CDP) in Zapata County, Texas, in the United States. As of the 2010 census, the CDP population was 667. It is named for the prominent Spanish saint, Ignatius of Loyola. The portion of the community between the Rio Grande and U.S. Highway 83 is listed on the National Register of Historic Places as San Ygnacio Historic District.

San Ygnacio, originally a Mexican pueblo, was founded in 1830 by settlers from nearby Guerrero, Tamaulipas on the outskirts of the recently established Uribeno Ranch. Frequent Comanche attacks in the early days of San Ygnacio necessitated the use of defensive stone architecture which has endowed the present area with uncharacteristically enduring historical sites from that period.

San Ygnacio is also historically notable for its involvement in the short-lived revolution of the Rio Grande Republic, which was established at meetings which were convened in the town in 1839.

San Ygnacio played an important role in the Garza Revolution from 1891 to 1893. Multiple small battles were fought near the town in both Mexican and American territory.

San Ygnacio was attacked in June 1916 by either Mexican Carrancistas of Seditionists. On June 10, over 100 Mexicans fought a losing battle with about 150 American soldiers from the 14th Cavalry.

San Ygnacio was the site of the filming of the 1952 film Viva Zapata.

Although many of San Ygnacio's neighboring municipalities were evacuated and consolidated in the deliberate 1953 flooding of the region which created Falcon Lake and "New" Zapata, San Ygnacio's residents petitioned for the right to remain on their land, which was high enough to escape substantial damage. Having survived, its architectural heritage was acknowledged in 1972 when it was added to the National Register of Historic Places, being the last standing collection of Mexican Ranch vernacular architecture, representing the 19th century settlement of the lower Rio Grande valley. Its oldest building is now a National Historic Landmark, the Treviño-Uribe Rancho, built 1830.

The private River Pierce Foundation works to continue the restoration of the San Ygnacio Historic District.

The community is also one of the few locations within the United States to view the white-collared seedeater, a small sparrow-like bird that inhabits second growth stands of Phragmites along the Rio Grande.

There were 253 households, out of which 44.7% had children under the age of 18 living with them, 58.9% were married couples living together, 15.8% had a female householder with no husband present, and 21.7% were non-families. 20.6% of all households were made up of individuals, and 11.9% had someone living alone who was 65 years of age or older. The average household size was 3.37 and the average family size was 3.97.

San Ygnacio was the site of the filming of the 1952 film Viva Zapata.

All content from Kiddle encyclopedia articles (including the article images and facts) can be freely used under Attribution-ShareAlike license, unless stated otherwise. Cite this article:
San Ygnacio, Texas Facts for Kids. Kiddle Encyclopedia.