Sandstone is a town in Pine County, Minnesota, United States, along the Kettle River. The population was 2,849 at the 2010 census.

Interstate 35 and Minnesota State Highways 18 and 23 are three of the main routes in the community.

Banning State Park is nearby.

Originally the Village of Fortuna was platted by W. A. Porter and incorporated on May 19, 1857. It was originally platted at the junction of the Point Douglas to Superior Military Road and Kettle River. Fortuna served as the county seat for Buchanan County, Minnesota. By 1887, it had 200 residents. Just north of Fortuna, the Village of Sandstone was platted in June 1887 and incorporated on September 28, 1887. On April 14, 1920, the villages of Fortuna and Sandstone merged and re-incorporated as the City of Sandstone.

The city's name in the Ojibwe language is Asinikaaning, meaning "At the quarrying place" due to the sandstone quarry located at the edge of the city. 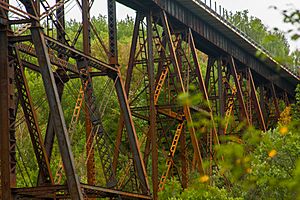 Sandstone is located on the Kettle River, known for its glacial kettles, and rapids well loved by kayakers and canoeists. The town was built-up around a large Sandstone quarry. Railroad conglomerate James J. Hill built many of the remaining sandstone structures in the town.

The city has Robinson Park, an historic and natural area that serves as the picnic area for the community, hosts ice climbing in the winter, preserving the Sandstone Quarry history and is an access point for the Kettle River.

The Sandstone Ice Festival sandstoneicefest.com celebrates the coming of winter and is held in the beginning of December each year. The event welcomes in the winter with ice climbing, winter camping and snow shoeing. In the spring local paddlers host the Kettle River Paddle Festival kettleriverpaddlefest.com, an event for canoeists and kayakers. A down river race and a whitewater rodeo attract paddlers from all over the mid-western United States.

The community is surrounded by Banning State Park, has a connection to the Munger Bicycle Trail and is home to the Audubon Center of the North Woods, a residential environmental education and conference facility that offers programs for schools, adults, colleges, and retreats.

In recent years, Sandstone has gained national recognition as the home of the Midwest Country Music Theatre. Performances from this traditional country and western music venue are seen regularly on the RFD-TV satellite network.

A Federal Correctional Institution rated for low-security federal inmates is located 2 miles outside of Sandstone.

There were 602 households, of which 36.5% had children under the age of 18 living with them, 31.9% were married couples living together, 21.3% had a female householder with no husband present, 7.0% had a male householder with no wife present, and 39.9% were non-families. 33.2% of all households were made up of individuals, and 17.8% had someone living alone who was 65 years of age or older. The average household size was 2.42 and the average family size was 2.94.

The area is served by East Central Schools.

The Pine Grove Learning Center of the tribal Nay Ah Shing School is nearby and has a Sandstone address.

All content from Kiddle encyclopedia articles (including the article images and facts) can be freely used under Attribution-ShareAlike license, unless stated otherwise. Cite this article:
Sandstone, Minnesota Facts for Kids. Kiddle Encyclopedia.