A portion of the Mille Lacs Indian Reservation is in the county.

Pine County was organized on March 1, 1856, with Chisago County being its primary parent county. Other portions of the original Pine County originated from Ramsey County. The original county seat was Chengwatana.

In 1857, Buchanan County in full and southern portions of Aitkin and Carlton counties were formed from the original Pine County, with Kanabec County organized a year later. In 1861, Buchanan County was dissolved and folded into Pine County. Pine County was re-organized in 1872, with Pine City becoming the new county seat. Pine County has been featured in a series of Mysteries written by Dean Hovey. The titles include: Where Evil Hides, Hooker, Unforgettable, and Undeveloped. Each of the Hovey books has been nominated for a Northeastern Minnesota Book Award (NEMBA) for their depiction of life in the area. 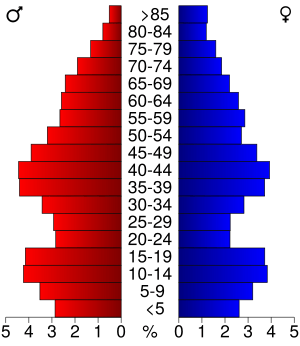 All content from Kiddle encyclopedia articles (including the article images and facts) can be freely used under Attribution-ShareAlike license, unless stated otherwise. Cite this article:
Pine County, Minnesota Facts for Kids. Kiddle Encyclopedia.