Pine City is a city in and the county seat of Pine County, in east central Minnesota, United States. A portion of the city is located on the Mille Lacs Indian Reservation. Founded as a railway town, it quickly became a logging community and the surrounding lakes made it a resort town. Today, it exists in part as a commuter town to jobs in the Minneapolis–Saint Paul metropolitan area. 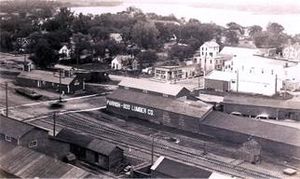 The Dakota Indians were the first in the area. With the Ojibwa expansion, the area became a mixture of the two. By the early 19th century, the area became predominantly Ojibwa. They trapped and hunted on the land and traded furs at the nearby trading posts. With the Treaty of St. Peters of 1837, dubbed the "White Pine Treaty", lumbering began in the area. Lumbering, though, was limited by access to the available waterways.

In the late 19th century, European settlers came to the Pine City area, which was still heavily forested with thick stands of white pine, some of the largest in the state. When the railroad arrived in Pine City so began a logging expansion. Pine City prospered and grew into a city that had everything needed to serve residents, farmers, and the fast expanding lumber industry. Pine City was platted in 1869. The city was incorporated in 1881.

When Buchanan County was merged with Pine County in 1861, the county seat was consolidated to Pine City because it was already well-established. Because of its location on the far southern edge of Pine County, there have been attempts over the years to move the county seat to more centrally located Hinckley and Sandstone. However, being the most populous city in the county, Pine City always prevailed as the county seat.

In 2005, the city became the first in rural Minnesota with an annual gay pride event, East-Central Minnesota Pride, and one of only two rural communities to hold such an event in the United States. A book capturing Pine City's history in vintage photos was written as part of the Images of America series and became available in 2010.

Christmas trees for the Minnesota Governor's Residence have often come from the Pine City area.

Pine City is reached as a day trip for tourists from the Twin Cities who enjoy the downtown's specialty stores and restaurants as well as a nearby casino and recreational opportunities, including the scenic St. Croix River valley. Also, a local historical site situated along the Snake River, the North West Company Post, has become a tourist draw; it was used by French fur traders nearly two centuries ago.

The Pine County Fair takes place in Pine City each year in late July/early August. A highlight of the fair is a two-night demolition derby that is one of Minnesota's largest, drawing several thousand spectators each evening. The five-day event is a free gate fair and also features free on-site parking. 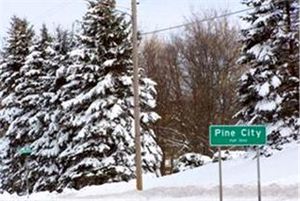 Winter scene with native pines in the background

Below is a table of average high and low temperatures throughout the year in Pine City. 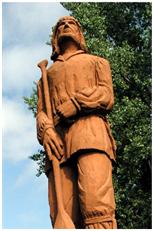 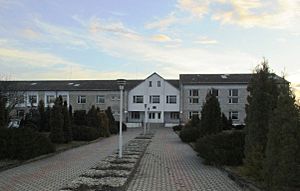 Presently, the Rush Line Corridor task force is studying the feasibility of rail service to serve area commuters and the Northern Lights Express passenger line is proposed to serve area residents as well as those traveling between the Twin Cities and Twin Ports. For travel within the city, there is local taxi service available. 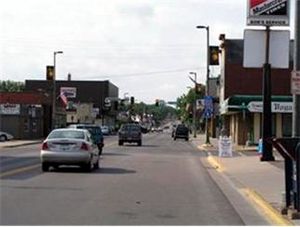 Pine City is located along Interstate 35 between the Twin Cities and Duluth. The St. Croix Scenic Byway also passes through Pine City. The major highways include:

The city has continued to grow since it was incorporated. In fact, it is one of only three small towns in Minnesota, along with Mora and Litchfield, to have never lost population. Much of the growth of the area occurs around the lakes in the neighboring townships, in Pokegama, Chengwatana or Pine City Township, and as of the latest census, the Pine City Zip Code (55063) had 9,348 residents.

The 2010 Census showed the Pine City area having some of the most same-sex coupled households of any rural area of the state. 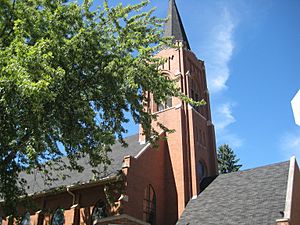 While the largest religion in Pine City is none at all, with over half of the community unchurched, it is home to various churches of varying denominations, including:

Pine City is home to several churches, of various denominations, including:

Pine City's growing arts community placed it on 2010, 2011 and 2012 lists of "Best Communities for Music Education in America." The high school band and musical theatre program built its reputation under the former direction of Mr. Bradley Mariska, and musical ensembles at Pine City High School give free performances throughout the school year. A major recent development is the Pine Center for the Arts, which opened in downtown Pine City in 2009. The center is a regional arts facility that houses a variety of educational and performance-based programs relating to theatre, music, visual art, literature, and dance. Classes and special events take place throughout the year. Pine City has an active community theater, the Heritage Players, which performs semiannually. The Pine City Arts Council sponsors a variety of annual events, most notably a free Friday night summer concert series held in Robinson Park. An annual concert series is also hosted in an 800-seat auditorium at Pine City Junior/Senior High School. This new performance space opened in 2014. 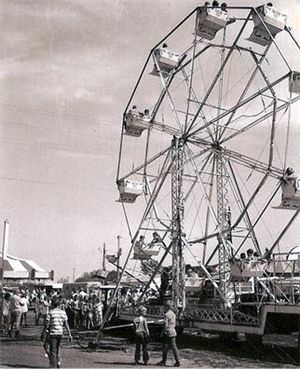 The following community and regional events are held in and around Pine City.

Lakeside Medical Center is one of the largest employers, with 140 employees. MINPACK, Inc. has 130 employees, and Atscott Manufacturing, 100; both have their headquarters in Pine City. Other large employers in the community include Walmart, Product Fabricators, Inc., Broekema Beltway, ISD 578, Therapeutic Services Agency, Pine County, Community Living Options and Lake Superior Laundry. 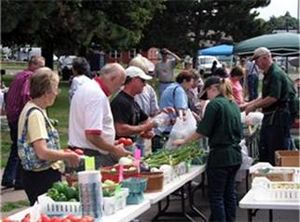 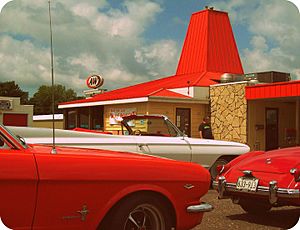 The Pine City Pirates compete in town team baseball in the Eastern Minny (now North) League, which is part of the Minnesota Baseball Association. Amateur baseball has been a part of Pine City culture for years and has enjoyed many successes in the past. The Pirates had several state appearances including: 1950, 1952 B 2nd, 1953 B 3rd, 1961 and 1962. The team was defunct for a period before being revived in 2017.

Pine Technical and Community College is a two-year institution that is part of the Minnesota State Colleges and Universities system and it offers technical and general education courses. Pine Tech's gunsmithing curriculum is one of the only programs of its kind in the country and draws students from throughout North America.

The Pine City Public Library is part of the East Central Regional Library. The ECRL holds nearly 400,000 volumes and serves over 65,000 cardholders in the region. Pine City is also home to the George E. Sausen Memorial Law Library, located inside the Pine County Courthouse.

The following list includes those who were either born in, or who have resided (or presently reside) in Pine City:

All content from Kiddle encyclopedia articles (including the article images and facts) can be freely used under Attribution-ShareAlike license, unless stated otherwise. Cite this article:
Pine City, Minnesota Facts for Kids. Kiddle Encyclopedia.