Booyah (also spelled booya, bouja, boulyaw, or bouyou) is a thick stew, believed to have originated in Belgium, and made throughout the Upper Midwestern United States. Booyah can require up to two days and multiple cooks to prepare; it is cooked in specially designed "booyah kettles" and usually meant to serve hundreds or even thousands of people. The name can also refer to a social event surrounding the meal. 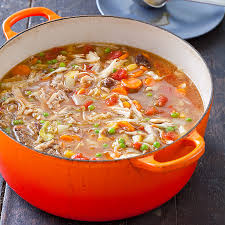 In cooking booyah, one makes a base or broth derived from meat bones, to which vegetables are added. Beef, chicken, and pork are popular varieties of meat for booyah (with all three often in the same kettle), with vegetables such as carrots, peas, onion, and potatoes also in the mix. A wide variety of seasonings are used, sometimes lowered into the kettle in a cheesecloth bag. Typical large-scale booyah kettles can hold more than 50 US gallons (190 L) and are made from steel or cast iron to withstand direct heat and the hours (or days) of cooking.

The term "booyah" may be a variant of "bouillon". It is thought to have derived from the Walloon language words for "boil" (bouillir) and "broth" (bouillon). The spelling with an H has been attributed to phonetic spelling by Wallonian immigrants from Belgium. The Dictionary of American Regional English attributes the term to French Canadian immigrants; others attribute it to a derivation from the Provençal seafood dish bouillabaisse.

An article in the Green Bay Press-Gazette on October 29, 1976, speculating on the origin of the spelling and related fundraiser event, reads:

Lester (Rentmeester) relates recollections of his schoolteacher father, Andrew, probably the "pioneer" of the word "booyah" . "At the old Finger Road School where he taught, funds were always in short supply," he recalls. "So my father hit on the idea of a community picnic to raise money for the school. He went around to parents and neighbors, gathering up beef and chickens for the traditional Belgian soup that would be the main dish at the benefit affair. And he also went down to the office of the old Green Bay Gazette, looking for publicity." The writer handling the news of the benefit picnic, so the story goes, asked what would be served. "Bouillon—we will have bouillon," came the reply, with the word pronounced properly in French. "The young reporter wrote it down as he heard it," Rentmeester relates. "It came out 'booyah' in the paper. It was booyah the first time it was served at Holy Martyrs of Gorcum Church—an affair my father also originated--and that's what people have called it ever since."

A November 19, 2015, Press-Gazette article repeats Rentmeester's claim but also suggests that the dish "could have erupted as a tradition in multiple places at once". The article notes that there are several variations on the name "booyah" around the Upper Midwest that "appear to be attempts to phonetically manage the hard-to-spell word 'bouillon', and they all are pronounced roughly the same".

Booyah is still made in northern and northeastern Wisconsin, Minnesota, and Michigan's Upper Peninsula at county fairs, VFW gatherings, at booyah cooking contests, and in smaller amounts at private gatherings. In a 2018 article in the Post Crescent, Booyah was reportedly sold at church and other non-profit fundraisers for $20 (U.S. dollar) per gallon (4 liters). The Green Bay Booyah baseball team was named after the stew.

All content from Kiddle encyclopedia articles (including the article images and facts) can be freely used under Attribution-ShareAlike license, unless stated otherwise. Cite this article:
Booyah (stew) Facts for Kids. Kiddle Encyclopedia.